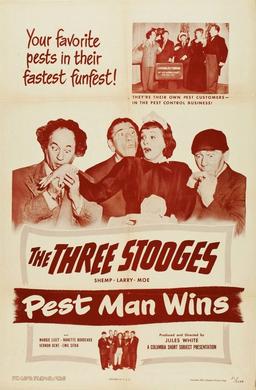 The Stooges are pest exterminators who decide to drum up business by planting mice, moths, and ants in an unsuspecting house. They select a fancy mansion where a high society dinner party is being held. After successfully infesting the house with pests, the trio are predictably hired to clean up their own mess without interrupting the party.

Although it’s a remake, Pest Man Wins is a surprisingly enjoyable Three Stooges short. It begins with bakery owner Mrs. Castor (Margie Liszt) explaining to her butler Meadows (Emil Sitka) that the reason for having so many pastries is to impress her guests to increase her business. At the same time, the Three Stooges (Moe Howard, Larry Fine, Shemp Howard) are hoping to increase their business as well – pest exterminators. But they’re not succeeding. They’ve been going door to door, and all they got was “one little ten dollar job”.  Until Larry gets the idea of spreading vermin throughout the house, and then the people would have to hire them!

Larry does that downstairs, while Moe and Larry climb a trestle upstairs, and do the same in a bedroom. Hearing people coming, they hide under a bed, while Mrs. Castor’s maid Fifi (Nanette Bordeaux) gets her more comfortable shoes. The sneaky Stooges manage to slip a mouse in the shoe and sprinkle ants on the ladies – unobserved. Once the ladies leave, after some suitcase slapstick, the two Stooges head back downstairs.

The reunited Stooges go the the front door, offering their pest exterminator service – including a bag of cats. Mrs. Castor agrees and has Meadows dress the Stooges to fit in with the guests. And then the chaos begins.

There are several very funny moments, such as a mouse crawling around Mr. Philander (Vernon Dent), who’s unaware of the attempts to exterminate it – at first. Eventually, the mouse climbs down his jacket, and he starts “dancing” to shake it loose. The Stooges join in the dance, in a very visually funny bit.

Poor Mr. Philander tries to play the piano – where Larry and Shemp have hidden the cats. It ends with Larry trying to dig the last of the cats out of the piano, losing his pants in the process.  But then food is served …

Once food is served, the typical Stooge greediness occurs, and while Moe reprimands Shemp, Larry tries to steal some silverware. Meadows catches him in the act, going “no, no” pointing with his arm – only for stolen silverware to fall out of the butler’s sleeve! A funny bit, reminiscent of Harpo Marx‘ routine.

The short ends with a high-energy pie fight, with scene from earlier Stooges short – most notably the “sword of Damocles” routine with Symona Boniface. Eventually, the suffering Mrs. Castor has had enough, and knocks the Stooges unconscious to the tune of the NBC chimes. The cats have the last laugh, and lick the pie off the faces of the unconscious Stooges.

Fifi: Madame! There are mouses in the house!

Mrs. Castor: They [the guests] must not know what you’re doing.
Larry: You’re a cinch, lady – we don’t know what we’re doing ourselves!

Larry: Try this cheese.
Moe: My favorite fruit! [takes and eats a piece of cheese]
Larry: Do you see spots in front of your eyes?
Moe: Nah … I used to see triangles.
Larry: I knew it – I should’ve put more rat poison in there.