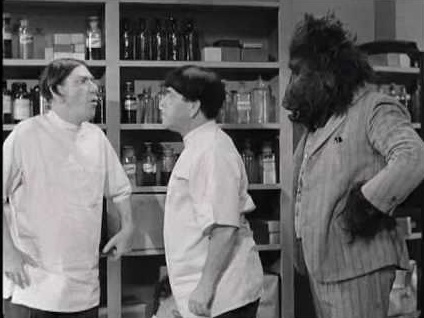 In Bubble Trouble, the Three Stooges are pharmacists who accidentally invent a fountain of youth formula that can turn old people young.  They turn an old lady into a beautiful young woman.  But when her husband takes the formula it turns him into a gorilla.

The bad news is that Bubble Trouble is a remake of All Gummed Up, with lots of reused footage.  The good news is, the ending is better.  The short appears to be overall improved, with a tighter pace.  The basic plot remains the same.  The Three Stooges (Moe, Larry, Shemp) are pharmacists, whose elderly skinflint landlord is throwing them out. Landlord Amos Flint (Emil Sitka) is also throwing out his wife (Christine McIntyre) since she’s become “too old.”  The Stooges decide make her a “pick me up” which rejuvenates her, and they celebrate with cake. Shemp has goofed up and added bubble gum instead of marshmallows to the cake.

I’ve always disliked the extended “bubble gum” routine in All Gummed Up, since it seemed tacked on only to stretch out the short film. In Bubble Trouble, it’s shorter, and the actual conclusion comes next.  Landlord Flint returns, sees his beautiful young wife, and offers the Stooges the deed to the store if they’ll make him young, too. But Flint overdoses on the formula, and turns into a gorilla! After some “monkeying around,” Moe decides to experiment on Shemp to find out the correct dosage.  However, Shemp rebels and knocks it into Moe’s mouth instead. Moe pantomimes acting like a monkey, and the short film ends.