Three Pests in a Mess

Synopsis of Three Pests in a Mess 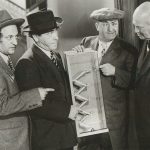 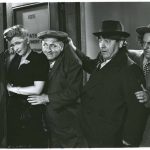 In Three Pests in a Mess, The Three Stooges (Moe Howard, Larry Fine, Curly Howard) are three inventors trying to a get a patent on their preposterous fly catching invention. When they learn they’ll have to catch 100,000 flies to earn enough to get a patent, some crooks across the hall overhear and think the Stooges are the $100,000 sweepstakes winners. A woman (Christine McIntyre) with the crooks corners the gullible Curly and tries to finagle the non-existent money out of him. When he confesses that the 100,000 are flies and not dollars, she turns against him, and has the crooks go after the Stooges. 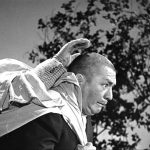 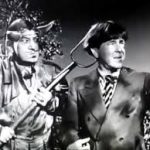 The Stooges hide in a sporting goods store where Curly shoots a dummy, which they mistake for a real person. The Stooges decide to bury the “corpse” in a pet cemetery.  However, the cemetery’s night watchman (Snub Pollard) contacts the cemetery owner (Stooge regular Vernon Dent) who arrives from a costume party with his partners, all dressed as spooks, and they proceed to scare the devil out of the stooges. 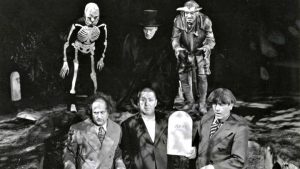 Funny movie quotes from Three Pests in a Mess

Curly: Hey Moe, you know that dead guy? He just slapped me.
Moe: Like this? [slaps Curly]
Curly: Yeah, just like that only it was on the other side.
Larry: Where’s the body?
Curly: I ain’t got any body, I lost it.
Moe: Well you’re gonna go find it!

Curly: [the guard’s in a bag, Curly thinks it’s the corpse] This is all your fault. [kicks the guard, the guard kicks him back]
Curly: Did you kick me?
Cemetery Guard: No.
Curly: Well it’s a good thing you didn’t because if you did I’d…
[screams and runs off]

Curly: [tumble weed rolls past him] Somebody just ran by me.
Moe: What’d he look like?
Curly: I couldn’t tell, he was on his hands and knees and had a big head full of curls…
Larry: Say, why don’t we put him [referring to the corpse] out in the street?
Curly: What? And have somebody run over him and kill him again? [shakes his head] We’re gonna bury him right here!