Home » Posts » For Crimin’ Out Loud

For Crimin’ Out Loud 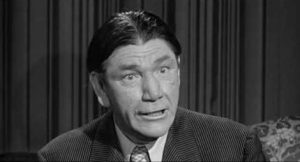 For Crimin’ Out Loud begins with the Three Stooges (Moe Howard, Larry Fine, Shemp Howard) being inept criminal forensic scientists, with slapstick coming fast and furious. Oddly, Larry is tending to stand up for himself more than usual – to no effect.  A mouse and toupee do the usual “parrot in a skull bit,” and soon Councilman Goodrich (Emil Sitka) calls for their help. And that’s virtually the end of the new material for the short film.  The rest is taken from Who Done It?

This is the final film with original Shemp Howard footage – he died shortly after filming. Considering that, it’s a sad farewell to Shemp.

Funny movie quotes from For Crimin’ Out Loud

Sign: Miracle Detective Agency – if we solve your crime, it’s a miracle

Shemp: I filed Smith’s toupee under ‘D’.
Moe: What’s the idea of filing it under ‘D’?
Shemp: It had dandruff.

Moe: We have to establish the time, first. Look at your watch.
Larry: Okay – but you’ll have to wait until I go to the pawn shop.
Moe: [pokes Larry’s nose and turns to Shemp] Hey, what does your watch say?
Shemp: It don’t say anything – you gotta look at it.