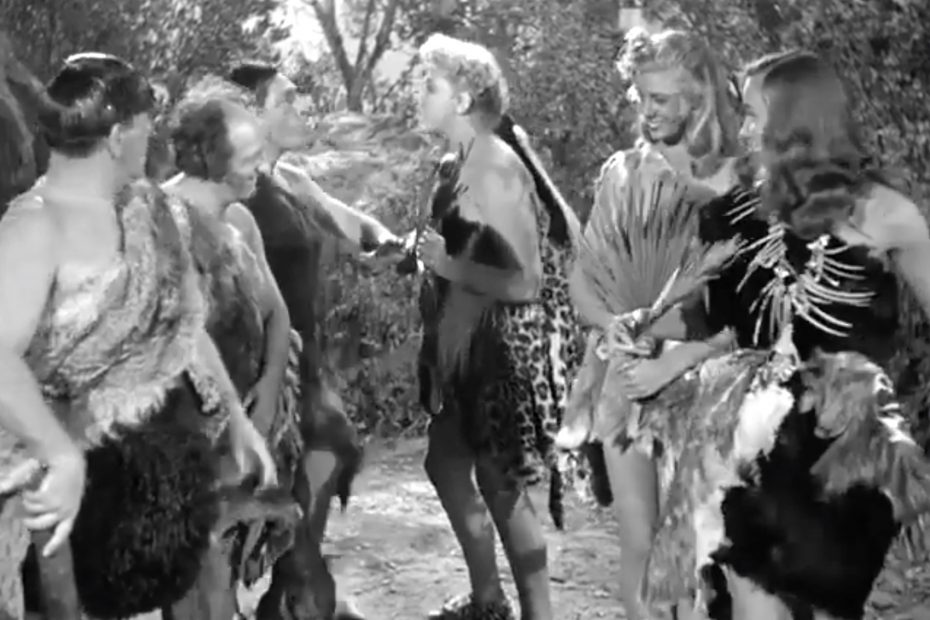 In I’m a Monkey’s Uncle, Cavemen Larry, Moe and Shemp find themselves in trouble when they steal the girlfriends of nearby cavemen, who declare war in retaliation. The Stooges fight back with an arsenal of inventive weapons, proving the animals aren’t the only things that are wild around there.

I’m a Monkey’s Uncle begins with the Three Stooges (Moe, Larry, Shemp) asleep in their cave, snoring mightily. Moe’s dreaming of his girlfriend Aggie, and thinking he’s pulling petals from a flower, starts pulling out Larry’s hair! “Wake up and go to sleep!” Morning comes, and Moe’s awakened by a fishing line tied to his toe. Fish for breakfast! The fish barks at them – dogfish! So Shemp prepares breakfast, while Moe & Larry clean up.

Shemp making breakfast is a slapstick affair, from splitting the wood with his head to starting the fire with a lighter he must have borrowed from Fred Flintstone. Then the milkman arrives!

Of course, there’s a lot of slapstick with Moe and Larry as well.

While Moe and Larry churn butter, Moe matches with with a duck. And loses — badly.

After lunch, Moe decides to “doll up” for his date with Aggie. And she’s bringing her two sisters over as well. Soon, Moe, Larry, and Shemp meet with Aggie, Maggie, and Baggie. Of course, the homely Baggie sets her eyes on Shemp. And after a brief courtship – with clubs – they’re in trouble, as the girls’ former boyfriends show up, to fight for “their” women!

So the Stooges improvise a catapult with a tree branch, and fire at their rivals:

In the end, the Stooges stand triumphant with their girls, ending the short film.

Title Card: Any similarity between the characters in this picture and real monkeys is definitely unfair to the monkeys.

Larry: Wake up and go to sleep!
Moe: Why you pussy-willow brain, you ruined a beautiful romance for me!

Moe: Did you take a bath?
Shemp: Why, is one missing?

Baggie: I’m Baggie!
Shemp: [reacting to the homely Baggie] You’re tellin’ me! Did you come from behind that rock, or from under it?

Shemp: What would you charge to haunt a cave?
Baggie: You say the cutest things.

Moe: I’ll protect those girls to the last drop of … your blood!

Trivia for I’m a Monkey’s Uncle

Cast of characters in I’m a Monkey’s Uncle