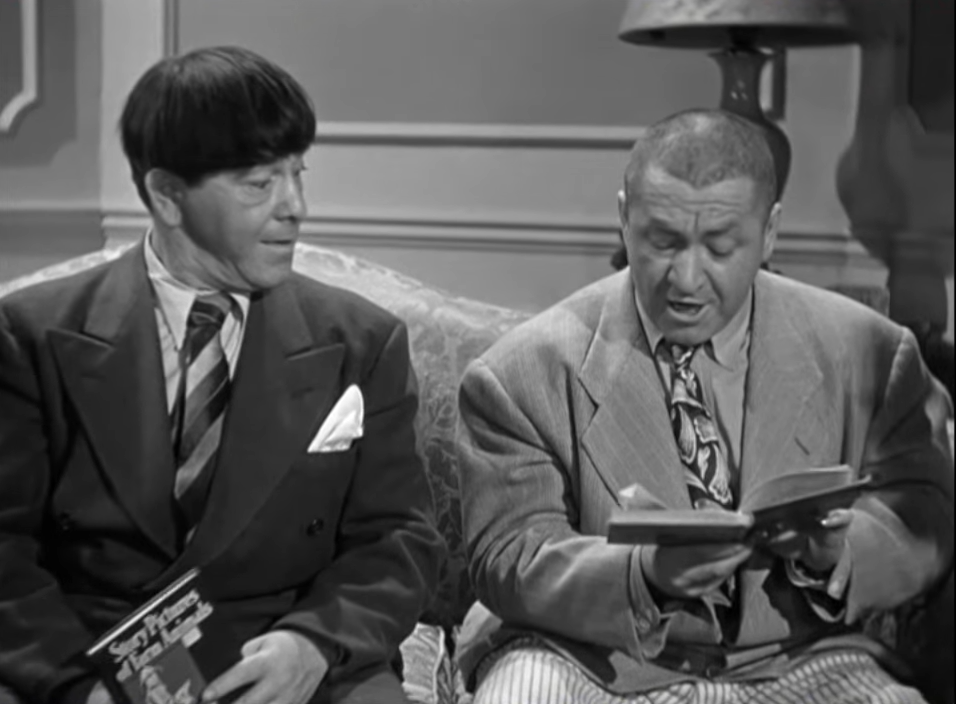 Half-Wits Holiday (1944) is a funny, yet bitter-sweet short film by the Three Stooges – Moe Howard, Larry Fine and the final performance by Curly Howard. Its a remake of an earlier Three Stooges short film, Hoi Polloi.  In Half-Wits Holiday, two college professors make a bet whether or not the Three Stooges can be turned into gentlemen.  Highlights of the short film include the Three Stooges pantomiming eating soup as they attempt to learn manners (failing miserably), Moe having a discussion with a dinner guest about the sword of Damocles (a long-time favorite scene) at the climatic coming-out party, and Moe hitting Curly in the stomach, only to have stolen silverware fall out – a sight gag reminiscent of Harpo Marx.  The film culminates in a massive pie fight, with Moe, Larry and various party guests throwing and receiving pies in the face.

Why are there no scenes of Curly in the pie fight?  Because, sadly, it was during the filming of Half-Wits Holiday that Curly Howard suffered from the stroke that necessitated his retirement from the screen.  This is why, although Half-Wits Holiday is a very good Three Stooges short film, I always have mixed emotions while watching it.  It is available on the DVD collection The Three Stooges Collection volume 5.

Moe (Moe Howard): But we’re organized. [holds up a card with the letters AAM on it]  The Amalgamated Association of Morons. Local six and seven-eighths.
Moe, Curly, Larry: We are morons! Tried and true! We will do our yell for you!

Prof. Quackenbush (Vernon Dent): How would you like to earn $1000 dollars?
Moe (Moe Howard): Who do we have to murder?
Prof. Quackenbush (Vernon Dent): It’s nothing like that. All you need to do is let me make gentlemen out of you.
Curly (Curly Howard): Oh please no! There hasn’t been a gentleman in our family for 50 generations!
Moe (Moe Howard): Quit bragging.

In training to be gentlemen

Moe (Moe Howard): Babe, I’d like to cover you with furs and automobiles.
Lulu Quackenbush (Barbara Slater): Why, thank you.
Moe (Moe Howard): Mink! Skunk! Porcupine!  Only the best for you!