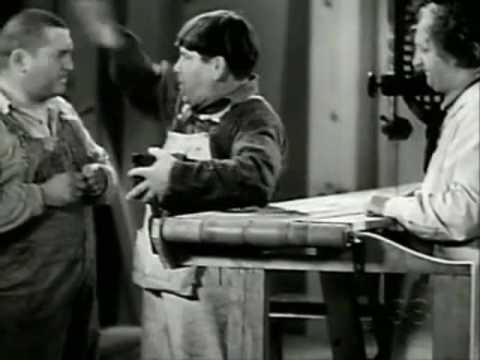 Slippery Silks begins with a photograph of the Three Stooges (Moe Howard, Larry Fine, Curly Howard) dressed as young children, which a lawyer is trying to use, with the help of the police, to find these three nephews of a recently-deceased man. “That’s the only photograph we could find among his effects.  The old man died very suddenly.”  “Probably took a look at the picture and couldn’t stand the shock.”  It turns out that the Three Stooges have inherited a “swanky dress shop.” In the meantime, those three missing nephews are working as “artistic woodworkers” where the rich Mr. Morgan (played by Three Stooges regular Vernon Dent) is bringing his $50,000 ornate box from a museum,  to have a duplicate made.  The inevitable destruction of that poor little Chinese box is hilarious, slowly building up to a crescendo of slapstick, and is the highlight of the film.

Running away from their expensive mistake, the Three Stooges think that they’re about to be arrested by the police, but instead they’re being taken to their newly-inherited dress shop.  In a funny bit mocking women’s fashions, the Three Stooges decide to put their woodworking experience to work, and design a new line of dresses, based on furniture.  It’s a hilarious visual joke that’s displayed at their first fashion show.

Slippery Silks is available on DVD as part of The Three Stooges Collection, volume 1.

Moe (Moe Howard): I’ve always wanted to make a cabinet like that! It’s been in my mind since I was 10 years old!
Curly (Curly Howard): Oh, aged wood, eh?

Morgan Morgan (Vernon Dent): Are you sure this work will be in competent hands?
Curly (Curly Howard): Sure, we’re all incompetent!

Larry (Larry Fine): [once told they inherited their uncle’s gown shop] Water… give me water.
[a car drives by and splashes all three of them]
Moe (Moe Howard): Water you had to have, eh? [slaps Larry]

Moe (Moe Howard): [critiquing a dress] A trifle too much train.
Curly (Curly Howard): Yeah, two cars and a caboose!

Fat Fashion Show Guest: [seeing one fashion called “The Hunter”] I think I’d look stunning in that riding abbot.
Curly (Curly Howard): [whispers to Moe] I think there’d be trouble figuring out which one was the horse.

Moe (Moe Howard): Go see if the coast is clear.
Larry (Larry Fine): [raises his head from behind the counter, gets immediately hit by a pastry]  It’s clear.