Termites of 1938, starring the Three Stooges 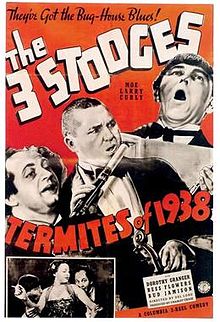 Termites of 1938 is an early Three Stooges short film, where the Stooges (Moe, Larry and Curly) disrupt a high society dinner party.  The trouble begins when a rich society woman has no date for a high-society party, and the hostess recommends that she use the Acme Escort Service.  The woman has her African American maid dial them up, after mentioning that she hopes that they will be ‘discriminating.’  The maid calls the Acme Exterminators instead.

The exterminators are, of course, the Three Stooges – Moe Howard, Larry Fine, and Curly Howard, who at that moment are watching as Moe unveils his “latest invention”.   Moe’s knack for inventing things appears to be somewhat of a recurring pattern in the early Stooges short films, and they all fail as miserably as this one. Moe’s invention is a convoluted series of trip wires in front of a mousetrap, that triggers a small cannon firing when the mouse trips the wire.

Unfortunately for the Three Stooges, the mouse is smarter than they are.  After exiting the mouse hole and avoiding the trip wires, the mouse climbs up the cannon and fires it off.  This knocks over the Stooges and deafening them for a few moments.  Which of course is when the call comes in, ensuring that they can’t quite hear the other side of the conversation, i.e. “I hope you’ll be on your best behavior.” – “We’re all about pest behavior, lady!”

The Three Stooges arrive at the party in their company car, with various pest control mottos covering the car, looking utterly out of place.  They enter, and almost immediately dinner is served.  Never one to miss out on a free meal, they dig in.  Stooge regular Bud Jamison is at the party as “Lord Wafflebottom”, who is unacquainted with American customs, and decides to imitate the dinner manners of the Three Stooges.

Soon everybody is doing likewise so as not to offend Lord Wafflebottom.  This is a highlight of the film, and should be seen to be appreciated.  After the dinner, the Stooges decide to entertain musically, with Moe playing a cello – with a saw.  When he saws the cello open, mice pop out, the female guests leave screaming and the ‘exterminators’ try to get to work.

Shortly afterwards, the hostess’ husband returns from his hunting trip, and decides to dispatch the Stooges with one of their own ‘gopher bombs’ that they conveniently left behind as they flee in their battered car.  A well-aimed toss of the bomb blows up the car, leaving the Stooges to scamper from the wreckage and head for the hills.  A funny Three Stooges short film, possibly not their funniest, but very funny and well worth watching.  I rate it 3 clowns out of 5.

Funny movie quotes from Termites of 1938

Moe, Larry and Curly: At yer service, day or night, we do the job and do it right … Acme!

Curly Howard: Look at all that silver!  What do you do with it?
Larry Fine: I’ll show you what to do with it. [starts stuffing silverware in his pockets]

Trivia for Termites of 1938