Home » Posts » Saved by the Belle

Saved by the Belle 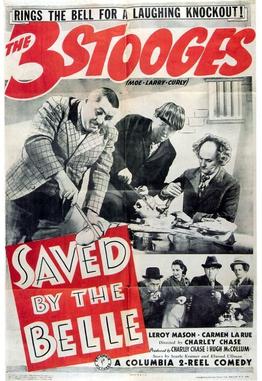 In Saved by the Belle, the Three Stooges (Moe, Larry and Curly) are inept traveling salesmen, trying to sell fur coats to the natives of Valeska, a tropical country. In addition to that, things get worse when they receive a telegram ordering them to “get rid of present wardrobe” and an official misunderstands and thinks that they are going to assassinate President Ward Robey.  Soon the Stooges are facing a firing squad, with a very funny scene as they eat their “last meal” in a jail cell, but with the help of the beautiful Senorita Rita, a revolutionary, they escape (and the wall collapsing from another earthquake doesn’t hurt any).

And they are sent on a mission to deliver important plans to the leader of the revolution.  The same man who owns the hotel that the Three Stooges were staying at — and skipped out on the bill!

It doesn’t help that, thanks to a recurring earthquake, the Stooges have brought back an advertisement instead of the plans.  Due to the intercession of Rita, the boys are told that they are going to be given commissions in the revolutionary army.  But instead are once again facing a firing squad.  Thanks to the timely intervention of another earthquake, however, the boys manage to escape in a truck full of explosives.

Due to a careless toss of a match by Curly, the truck soon explodes, and the boys land, unharmed, on the swayback horse that they rode to the rebel camp — and promptly fall off.

Saved by the Belle is a very funny Three Stooges short film, and I recommend it.  It’s available on DVD as part of The Three Stooges Collection volume 2.

Singapore Joe: I’ll go in and get it!  What kind of fool do you take me for?
Curly (Curly Howard): Why, is there more than one kind?

Policeman: You must come along for questioning with General Casino.
Curly (Curly Howard): But we don’t play at the casino! How about Gin Rummy?

Señorita Rita: But my General, the fat one does not look like a spy. He looks very innocent.
Curly (Curly Howard): Oh, I don’t know, I’ve been around!

Curly (Curly Howard): I always wanted to be in the Army, it’s such steady work.

Moe (Moe Howard): [not realizing they’re about to be executed] They’re gonna fire a salute in our honor!
Curly (Curly Howard): Hey, we want 21 guns!
Guard: Three will be sufficient.

Curly (Curly Howard): [looking at the rifle holes in the wall] Hmm, woodpeckers.

Trivia for Saved by the Belle