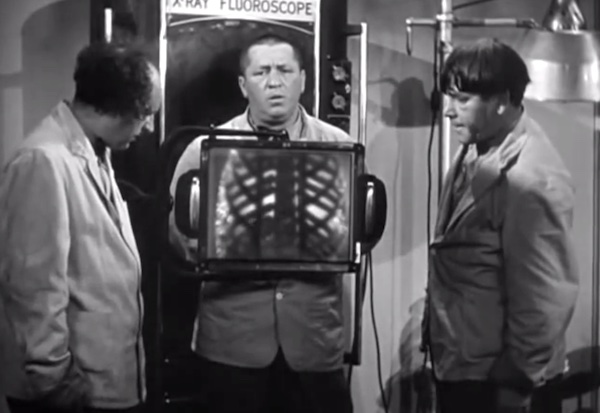 A Gem of a Jam (1943) is, simply put, a flawed gem. It begins very well, with the Three Stooges (Moe Howard, Larry Fine, Curly Howard) in white coats, discussing their “diagnosis”.  Which turns out how to clean a stubborn stain off the floor.  The boys are janitors, cleaning a doctor’s office, which gives them the opportunity for some classic Three Stooges slapstick comedy.  Examples include Curly unintentionally dropping a metal plate with live electric current down Moe’s pants.

As Moe is being shocked, Curly decides to join in the “dance”, and Larry tries to join in with a Russian dance routine. As part of the mayhem, Curly knocks a goldfish bowl onto his head, and swallows the goldfish, giving Moe a chance to use an X-ray machine to locate the critter and pull him out by making an impromptu fishing line and catching the fish, pulling him back up Curly’s throat.

The insanity is interrupted by three robbers, one of whom has been shot, and his friends insist that the “doctors” operate on their pal. Forced at gunpoint, the Stooges try to stall for time, laying the crook on the table and administering the anesthesia with a mallet. They accidentally raise the hospital bed to a45-degreee angle, and the poor crook falls out the window behind the bed.  Into a waiting police car, with Fred Kelsey playing a police office who takes him off to jail.

The Stooges try to fool the other gangsters by having Curly take his place under the sheet.   Eventually, they place the skeleton from the doctor’s office in his place, causing one of the crooks to exclaim “They boned him!” when they look under the sheet.  And leading in to a chase for the stooges.

Hiding in the Basement

At this point, the film loses much of its’ steam.  The Stooges try to hide in the basement of the building.  Where Curly falls into a vat of plaster and scares people off as a “ghost”. Not a terrible Three Stooges short film, but not great either.  I only rate it 3 out of 5 clowns.

Funny movie quotes from A Gem of a Jam

Curly: I think it’s a bad case of Spectus-onthefloorus!
Moe: Then we’ll need to use plenty of sulpha thya-soap!

Larry: I wouldn’t say yes, but I couldn’t say no.
Curly: Would you say maybe?
Larry: I might!

Dudley Dickerson: You sho’ is ugly!

Trivia for A Gem of a Jam