Home » Posts » A Plumbing We Will Go 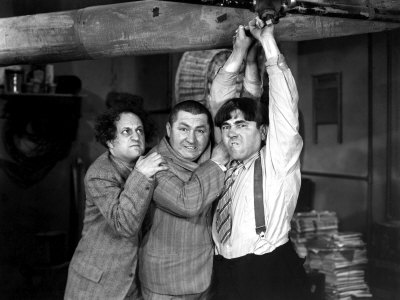 A Plumbing We Will Go begins with the Three Stooges in court, on charges of stealing chickens.  It’s a funny scene, with Moe acting as a ventriloquist with Curly and Larry sitting on his lap as the dummy.  The judge throws the case out due to lack of evidence, and Curly pulls his hat out of his pocket – letting fly a small storm of chicken feathers falling all over the arresting officer, played by Stooge regular Bud Jamison.  The Three Stooges snap their fingers in the officer’s face on the way out of the courtroom, who has trouble with it and ends up with a kick in the seat of the pants from the officer.

Next, the boys are “fishing” in an aquarium at a pet shop for supper, and Curly plays with a mannequin dressed as a police officer, only to fall afoul of Officer Jamison again.  A chase ensues, with Curly interrupting a street magician who’s using a “magic box” to make his assistant reappear — with Curly!  Closing the door, the magician tries again, only this time the assistant disappeared and Moe and Larry in the box with Curly!  Officer Jamison pursues, and the comedy chase end with the Three Stooges “borrowing” the truck of Casey the Plumber, ending with Bud Jamison on an out-of-control cart landing in a pile of wet cement.  It’s a very funny scene, and serves to set the stage for the remainder of the short film.

The Three Stooges stop the plumber’s truck outside of a mansion, and when the butler mistakes them for the plumbers that he’s been expecting, and they dash inside to evade the still-pursuing Officer Jamison.  Soon the Stooges are dashing “up to the basement” to try and fix the leak, and Curly goes further upstairs to turn off the water (since water always runs downhill, of course) while Larry accidentally knocks a hole in a heating vent, which he and Moe repair with a … woman’s corset!

The mayhem starts coming fast and furious, as Curly throws a man out of the shower in order to turn off the water, and soon has the water running nonstop.  While Curly begins piping himself into a corner, Larry runs outside to turn off the water by digging a hole in the lawn and looking for the water pipe.  Soon the water is behaving crazily throughout the house, as the suffering cook in the kitchen finds out.

In no time at all, Curly has caged himself with plumbing pipes (a classic comedy scene), he drills a hole in the floor to let the water out, and starts soaking Moe.  Curly goes to help Moe, and starts pulling wire out of a pipe – causing the electrical system of the house to go crazy, with a kitchen light bulb filling with water, the stove spitting water, a demonstration of Television (which was brand-new at the time) displaying Niagara Falls – with the water exploding out of the set, the telephone receiver, etc.

Soon the owner of the house comes home, and it’s the Judge from the courthouse!  The try to escape through the enormous hole that Larry’s been digging, and they exit out of that same magician’s box (Professor Bilbo, who’s now performing in the Judge’s garden for a party held by the Judge’s wife), pursued by the police, including Officer Jamison and a motorcycle cop!

Trivia for A Plumbing We Will Go

The cook (Dudley Dickerson): This house has sure gone crazy!

Moe (Moe Howard): Who said you need brains to be a plumber?

Man in shower: I beg your pardon!
Curly (Curly Howard): Why, why did you do?

Moe (Moe Howard): This ain’t a house, this is a sieve!

1 thought on “A Plumbing We Will Go”