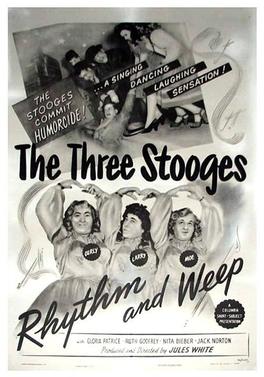 Synopsis of Rhythm and Weep

At first, in Rhythm & Weep we find the Three Stooges are about to commit suicide after being repeated failures as comedy actors. So, they go to the rooftop of a building to leap off … But then they find three beautiful women, failed dancers, about to do the same thing. Whom the Stooges immediately fall in love with, and they all decide to live! And then they’re “discovered” by a rich Broadway producer, and all seems well …

Moe (Moe Howard): Well this is the 26th theater we’ve been thrown out of this month. What does that leave us?
Larry (Larry Fine): Four more theaters…
Curly (Curly Howard): Except February which has 28.
Moe (Moe Howard): Quiet!

Moe (Moe Howard): If you’re going to bump yourself off in an hour, what’s the idea of eating pie?
Curly (Curly Howard): So I can di-gest right. Nyuk nyuk nyuk!

Larry (Larry Fine) [kissing Tilda]: This I like, and I get paid for it too

Trivia for Rhythm and Weep