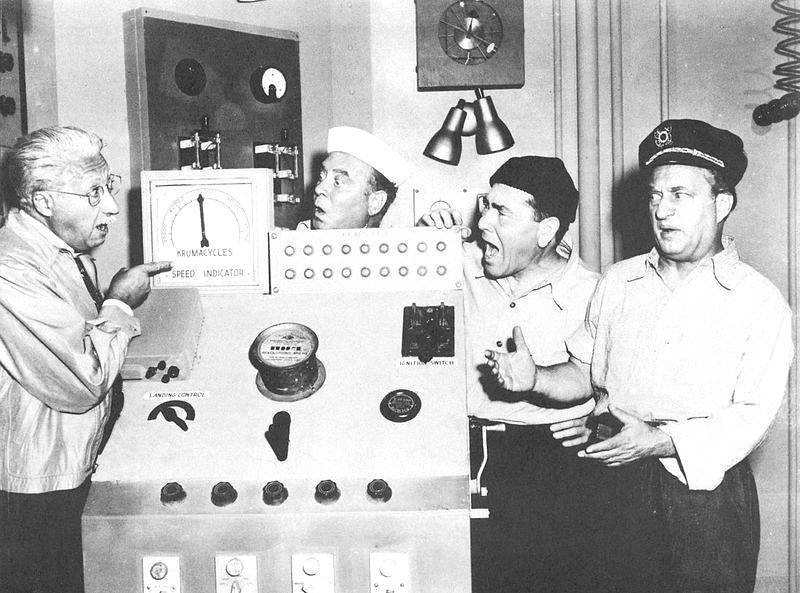 In Space Ship Sappy, the Three Stooges (Moe Howard, Larry Fine, and Joe Besser) answer a job advertisement, and find out that the job is to serve as assistant to a scientist (Benny Rubin) and his beautiful daughter on their secret trip to Sunev (“It’s Venus spelled backwards!”).  And soon they are blasting off. There are several cute moments, such as Moe opening a porthole only to be hit by an egg from a flying bird, and the Stooges start exploring once they land, only to find beautiful women. Hungry beautiful women. Hungry, beautiful, cannibal women. After failing to teach the lethal lovelies how to kiss (Moe redefines what a “hot kiss” is), the Amazon Cannibal Women from Venus (boy, does that sound like a bad movie title) tie up the boys and start tickling them – in order to tickle them to death.

At that moment, they are frightened by a Venusian space monster (that looks amazingly like a Gila monster) and the girls run away, while the Stooges escape back to the ship. They accidentally knock out the scientist and his daughter, and have to pilot the ship back home themselves. Just as it looks like unmitigated disaster, the scene cuts to the Liars Club, where emcee Emil Sitka awards the Three Stooges the prize for being the biggest liars in the world.

One of the lesser Three Stooges short films. Space Ship Sappy is available on DVD as part of The Three Stooges Collection volume 8.

Moe (Moe Howard): Get ahold of that rock ‘n roll dialogue.
Joe (Joe Besser): They must have heard of Elvis Presley.

Professor Rimple (Benny Rubin): We have reached Sunev!
Joe (Joe Besser):  And the Sunev we leave, the better!

Daughter (Doreen Woodbury): The air-test gauge shows the air outside to be the same as on Earth.
Moe (Moe Howard): Oh, smog!

Moe (Moe Howard): They don’t know how to kiss.
Joe (Joe Besser): Let’s teach ’em!
Larry (Larry Fine): I’m a natural! Whenever I go down the street, people say “Look at that kisser!”

Moe (Moe Howard): I wonder what made them run.
Larry (Larry Fine): They probably got a good look at your kisser.

Moe (Moe Howard): [at the space ship’s controls] Hey, fellas! I know how to run this thing. I used to fly a kite!