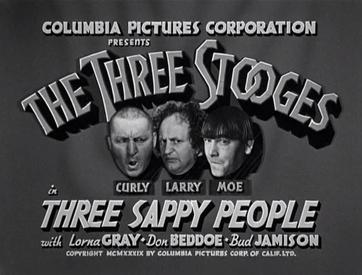 The Three Stooges short film Three Sappy People is one of the Stooges finest attempts at making fun of the upper class.  The film begins with the Three Stooges working as troubleshooters for the telephone company. They!Tll

At the high society dinner party

Once at the party, the Three Stooges fit in like a square peg in a round hole. They inadvertently cause Sherry (and the audience) gales of laughter. Often at the expense of the butler, played by Three Stooges regular Bud Jamison..  This culminates in a very well-done pie fight. It ends with Moe, Larry and Curly being paid handsomely by the rich man, who then presents his wife Sherry with her birthday cake … in the face! A very good Three Stooges short film, highly recommended.

Highlights of the film include the well-known Moe telling Curly “Remind me to tear out your Adam’s apple!” with Curly pulling out a pencil and notepad in order to make a note of it.  Disgusted, Moe takes away Curly’s pencil, only to have Curly produce a larger pencil, and after Moe takes that away, a gargantuan pencil.  The pie fight itself in wonderful, and has to be seen to be appreciated.

Moe (Moe Howard): Remind me to tear out your Adam’s apple!
Curly (Curly Howard): I’ll make a note of it.
[pulls out a pad of paper and a pencil]

Moe (Moe Howard): [to Curly] Why don’t you get a toupee with some brains in it!