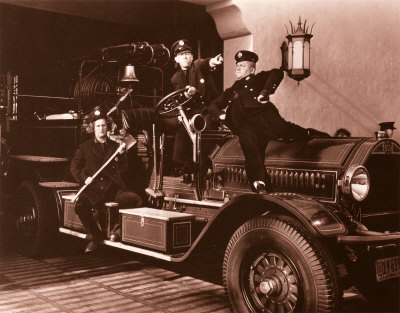 In False Alarms the Three Stooges (Moe Howard, Larry Fine and Curly Howard) are inept firefighters, who have once again missed the fire alarm, and they’re about to be fired by their long-suffering fire chief, (Stanley Blystone) when they beg and grovel their way to one last chance. No sooner do they get their last chance than Curly decides to sneak out of the firehouse to visit his girlfriend … who has dates for Larry and Moe as well. 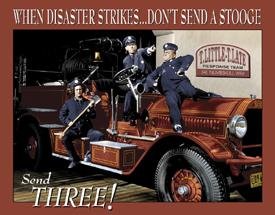 Larry tries to sneak out, but Moe pulls him by the hair (up the fire pole, no less) and locks them both in a closet, to keep them from going out — and getting fired.  When Larry drops the key down a sink, Moe uses him as a plunger to retrieve it!  Meanwhile, Curly decides that the only way to get the other Stooges to arrive is to set a fire alarm, which succeeds — in getting the other fire fighters to arrive, without the imprisoned Moe and Larry.

Moe and Larry, escaping the room and seeing that the other firefighters have already left, decide to race to the fire in their chief’s brand-new car … which we know will not end well.  They arrive before the fire trucks, and the Three Stooges, along with their dates, try to get away in the fire chief’s car before the fire trucks arrive, with a zany driving routine as Curly weaves between traffic, finally crashing.  Moe extracts the others, Mimi (the plump girl) gets into a slap-fight with Curly, and the fire chief is approaching!

The short ends with the Stooges driving the wrecked car into a Bekins moving van, which promptly explodes … and the Three Stooges drive off with the still-smoking moving van.

In all, False Alarms is a good Three Stooges short film, fast paced and funny. I rate it four stars out of five.

Fire Chief: If this were the army I’d have you shot at sunrise!
Curly (Curly Howard): But you couldn’t do that, cap, we don’t get up that early!

Minnie: I guess the only way I can get a man to come to see me is to call a doctor.

Minnie: You’ll like me after we get acquainted. I grow on people.
Curly (Curly Howard): So do warts!

Curly (Curly Howard): Is there any gas in the tank?
Larry (Larry Fine): The arrow’s half-way. I don’t know if it’s half empty or half full!