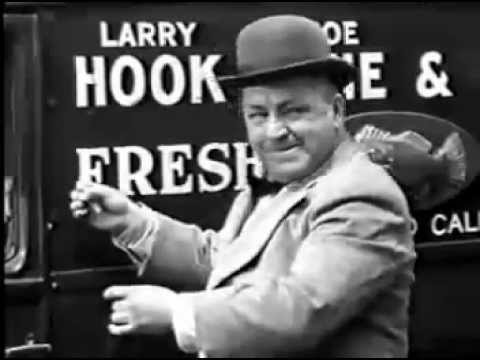 In Cookoo Cavaliers, the Three Stooges (Moe, Larry, Curly) go from inept fish vendors to inept beauty salon owners – who ruin the hair of 4 beautiful señoritas! And then have to run for their lives!

In Cookoo Cavaliers, the Three Stooges are unsuccessful fish vendors. Their smelly 30-day-old catches and lack of customers force them to purchase what they think is a saloon down in Cucaracha, Mexico, but it turns out to be a beauty salon. Here one feels a little sorry for the señoritas whose hair is totally destroyed by the Stooges’ ineptitude. However, Curly’s pantomime (with sound effects) of a bartender is a gem.

Woman (Anita Garvin): [to fishmonger Curly] Do you have a haddock?
Curly Sinker (Curly Howard): [feeling his forehead] No, I don’t have no haddock.  But I get a little attack there [points to stomach] every time I eat too much.

[dog walks up to the Stooges’ basket of fish, smells it, and passes out]
Moe Line (Moe Howard): What’s up with him?
Curly Sinker (Curly Howard): Tarpon monoxide!

Moe Line (Moe Howard): How much do you want for the saloon?
Pedro (Lynton Brent): You give me three hundred dollars, I’ll give you the business.

Manuel Gonzales (Bob O’Connor): I want you to meet Juanita, Conchita, Pepita, and Rosita.
Curly Sinker (Curly Howard): They must be hungry. They all end in “eat a”. Nyuk nyuk nyuk.
Pepita (Blanca Vischer): Oh my English is not so good looking, no?
Curly Sinker (Curly Howard): Your English is atrocious.
Pepita (Blanca Vischer): Oh so sweet. Thank you señor.