Stooges on the Run [DVD collection] 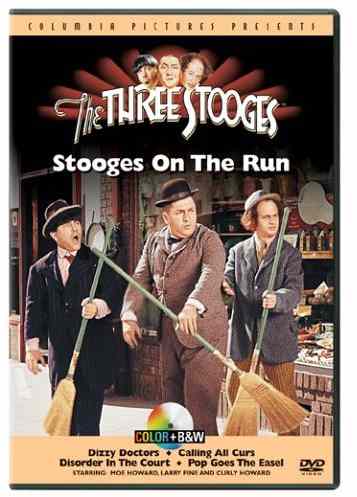 The good news is that Stooges on the Run is a collection of four of the Three Stooges shorts, all featuring Curly (as well as Moe and Larry, of course).  The other good news is that the films have been digitally restored, and colorized as well (the DVD includes both the black and white and colorized versions, similar to The Three Stooges – Stooged and Confoosed).  That’s the end of the good news.

The bad news is, all four of these shorts have already been released.  For instance, the short film Disorder in the Court was released on the previous colorizedized collection, The Three Stooges – Stooged and Confoosed.  Likewise, Dizzy Doctors has been released as part of a DVD release titled Dizzy Doctors (oddly enough), Pop Goes the Easel was on Stooges and the Law, and Calling All Curs is available on Cops and Robbers.

So, do I recommend purchasing this?  Not if you have two or more of these already.  If you don’t have any of them, then yes – after all, the video is nicely cleaned, and colorized versions are included as well.