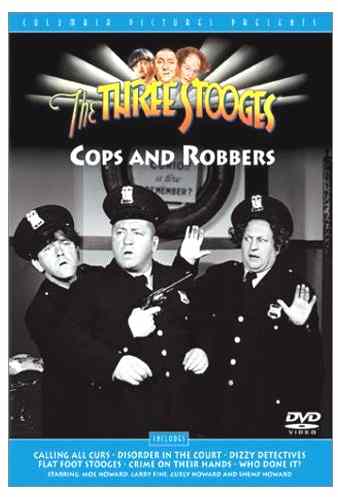 Cops and Robbers is a nice collection of Three Stooges short films, with four starring Moe, Larry and Curly, and the other two featuring Shemp as the ‘third stooge’.

Many of these are some of The Three Stooges’ better shorts, including the (seen everywhere) Disorder in the Court.  All of these shorts follow the theme of the stooges either as police or detectives, or interfering with the plots of criminals (hence, the Cops and Robbers title).  A very good collection, and recommended.

Disorder in the Court

The Three Stooges (Moe, Larry, and Curly) are witnesses at a trial where their friend, a dancer at a nightclub where they are musicians, is accused of murder. The stooges manage to disrupt the proceedings but save the day when they discover the real murderer’s identity.  One of the Three Stooges’ best short films

The stooges run a pet hospital and get an important patient, Garcon, a rich ladies poodle. When dognappers posing as reporters steal the poodle, the boys are in a tough spot. First they try to fool their client by disguising a mutt as the poodle. When that doesn’t work, they use the mutt as a bloodhound to track down the crooks. When they discover the bad guys hideout, Curly defeats them in a fight and they find Garcon, only to discover that “he” has had a litter of puppies.

The stooges are carpenters who become policemen. A mysterious burglar disguised as a gorilla has the cops baffled and Mr. Dill, the head of the citizens league, threatening the police chief’s job. The boys go on the case and pose as night watchmen at an antiques store. They confront the crook, who turns out to be a real gorilla owned by Dill. After defeating Dill and some other bad guys in a wild fight, the gorilla drinks some nitroglycerin and blows up.

The Three Stooges (Moe, Larry, Curly) are firemen at a station that still uses horses to pull the engines. A salesman who wants to sell the chief some modern equipment plants gun powder in one of the engines. The chiefs daughter catches him and after a chase both are knocked unconscious. When a fire starts, the stooges respond to the alarm, but don’t realize its their firehouse that’s burning! Somehow they manage to arrive in time to save the girl, and the villain gets his just desserts.

The stooges are private detectives looking for a missing millionaire. They wander around the millionaire’s spooky mansion confronting various crooks and a dangerous dame. The stooges vanquish the crooks (Shemp uses his “trusty shovel”) and find the missing man.

Crime On Their Hands

The stooges are janitors working in a newspaper office. When an anonymous caller phones in a tip about the theft a famous diamond, the boys decide to become reporters and go after the crooks. They find the crooks, but Shemp accidentally swallows the diamond which was hidden in a bowl of candy. The crooks want to cut the diamond out, but the boys foil them with the help of a friendly gorilla.