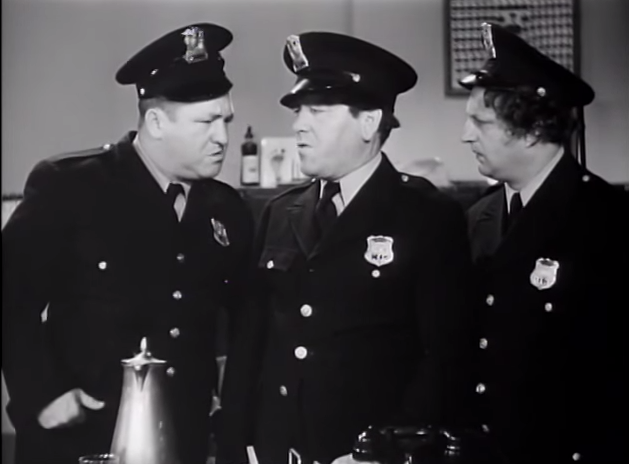 In Dizzy Detectives, the Three Stooges (Moe, Larry and Curly) are inept carpenters, who become inept police officers.  A burglar, seemingly disguised as a gorilla, has the police chief I. Dolittle (played by Three Stooge regular Bud Jamison) baffled and has the head of a citizen’s league, Mr. Dill, threatening the police chief’s job.

The chief, in turn, threatens the Stooges, who pretend to be watchmen at Gypsom Good Antiques.  Sure enough, the burglar appears. Only to be revealed as a real gorilla, owned and trained by Mr. Dill himself.  The typical Three Stooges fight ensues, with the boys defeating Mr. Dill and his henchmen.  Curly defeats the gorilla by head-butting the creature — however, the gorilla had accidentally swallowed nitroglycerin, and blows up!