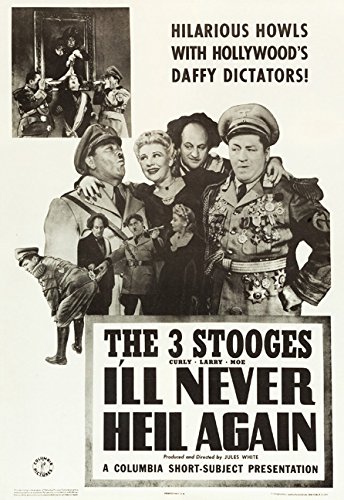 I’ll Never Heil Again is a sequel to the Three Stooges‘ earlier parody of the Nazi party, You Nazty Spy, where Moe has overthrown the rightful monarch of Moronica, at the urging of three government officials and is now known as the dictator, Moe Hailstone.  Moe does a wonderful imitation of Adolph Hitler, poking fun at the pretentious dictator.  However, the three government officials (Mr. Amscray, Mr. Ixnay, played by Vernon Dent and Mr. Umpchay, played by Bud Jamison) realize their error and seek to replace the king on the throne.  With the help of the king’s daughter (Mary Ainslee), who will infiltrate Moe Hailstone’s palace as a seeress, and plant an explosive pool ball on his pool table.

The entire short film is hilarious from start to finish, with dozens of bits small and large, such as:

In short, it’s a very, very funny short film, and very biting sarcasm for the time – such as pointing out their bombing of hospitals, orphanages, cemeteries”and other important military targets.”  Highly recommended, rated 5 clowns out of 5.

Opening screen credit: The characters in this picture are all fictitious. Anyone resembling them is better off dead.

Prank caller: Have you got anything on?
Field Marshal Herring (Curly Howard): No, not at all.
Prank caller: You’ll catch cold.

Hailstone the Dictator (Moe Howard): I want to know about my armies!  Have we taken the dikes of Holland?
Field Marshal Herring (Curly Howard): Certainly!  And the Van Dykes of Amsterdam!  And the Updikes of Rotterdam, and the hunchback of Notre Dam!

Princess Gilda: I am your new soothsayer, the seeress of Roebuck.
Minister of Propaganda (Larry Fine): Your father must be Roebuck.
Princess Gilda: No, for I was raised by Montgomery.
Field Marshal Herring (Curly Howard): Oh, you;re Montgomery’s ward!

Field Marshal Herring (Curly Howard): You used too much english.
Hailstone the Dictator (Moe Howard): Never speak that word in this house!