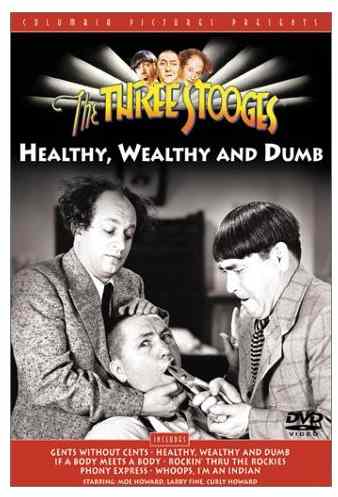 Healthy, Wealthy and Dumb begin with the Three Stooges (Moe Howard, Larry Fine, Curly Howard) living in their apartment, eating silver dollar pancakes – which Moe and Larry are using as poker chips.  Larry keeps having “beginners luck” — until Moe finds his large stash of hidden aces, shaking them loose, as Curly complains about having to spend his time cooking, as it’s taking time away from trying to win $50,000 in a radio contest by writing the winning jingle.

Moe tries to eat his hard-won pancakes, but in one of the Stooges trademark moves, he accidentally puts the glue (that Curly is using to seal an envelope) on his pancakes (thinking that it’s maple syrup) — and locking his lips together. Larry “helps” by pouring boiling water over his lips, freeing Moe — who thanks Larry with a forehead slap. In the meantime, Curly eats the pancakes, and ends up in the same predicament, with Moe trying to use pliers to pull the spoon out of Curly’s mouth.

Before any more chaos, it’s time for Curly’s radio program, the Coffin Nail Cigarette Program – and Curly has won $50,000! I

At the Hotel Costa Plente

n short order, the Three Stooges are putting on airs and staying at the fancy Hotel Costa Plente, where the Hotel Manager shows them the expensive furnishings that they’ll be demolishing shortly. In short order, they discover the row boat … horse trough … bath! and Larry (against his will) starts taking a bath, while Moe and Curly begin looking at the canopy bed — with Curly thinking that the canopy is a top bunk, and after a running start (and a jump off Moe’s back) Curly actually makes it there — and collapses the bed on top of Moe as soon as he lays down.

Having destroyed the expensive Henry VIII canopy bed, the $5,000 vase is next … but that’s partly the monkey’s fault.  What monkey? Why, the monkey that belongs to the three lovely gold diggers who plan to disguise themselves as lonely, rich widows and marry (and divorce) the Stooges in order to get their money — and send Darwin, their pet monkey, into the boys’ room so they’d have an excuse to come looking for their monkey.

Darwin does so, as Curly is in the midst of drinking copious amount of champagne, and thinks that he’s having a hallucination.  Darwin then climbs into Larry’s empty pants and starts moving around, causing Moe to think that it’s haunted.  Larry comes out of the bath tub, and is about to bash it with the vase when Moe intervenes, and picks up a board to beat the “haunted” pants with — only to destroy the vase with his backswing.

Your winnings, after taxes, …

The hotel manager arrives, with a registered letter for Curly, and is shocked at the damage to the priceless artifacts … while Curly is shocked at the news that, after taxes, his $50,000 prize has been reduced to $4.85.

While the Stooges try to stall, the suspicious hotel manager has alerted the hotel detective, played by Three Stooges regular Bud Jamison, to keep on eye on them — giving Curly the opportunity to squirt ink into his eye through the keyhole — “I dotted his eye!” The Stooges attempts to sneak out are foiled by the detective, and the Stooges think that the knocking on their door is the detective again, and decide to soak him with the water from the champagne buckets — accidentally soaking the deceitful beauties instead, who have come “looking” for their “lost” pet monkey.

Swiftly, the boys are engaged, the hotel manager is about to throw them out, and the girls find out that they’re actually paupers — ending in an unhappy ending for our trio. Healthy, Wealthy and Dumb is an excellent Three Stooges short, highly recommended, and available on DVD as part of The Three Stooges Collection, Vol 2: 1937-1939.

Moe [playing poker with Larry, using their pancakes as chips]: I better win today, I haven’t had breakfast for a week!

Moe: [having discovered that Larry is cheating at cards] If you’re going to cheat, cheat fair! If there’s anything I hate, it’s a crooked crook!

Hotel Costa Plente manager: This bed goes back to Henry the 8th.
Curly: That’s nuthin’. We had a bed that went back to Sears Roebuck the 3rd.

Curly Howard: [a bathtub is behind a door that they open] Ohhhh, a rowboat.
Larry: A rowboat, you’re crazy. That’s a horse trough.
Moe: Rowboat, horse trough. In a hotel? That’s a bathtub, you imbeciles. Go take a bath.
Larry: But we can’t. It ain’t spring yet.
Moe: Oh yes it is. See the pretty grass?
Larry: [looks toward the bathtub] Where?
Moe: [Moe shoves him in and closes the door. Curly giggles] You’re next.
Curly Howard: But I had a bath.
Moe: When?
Curly Howard: July 14, 1910. I was too young to fight about it then.
Moe: What are you gonna do now?
Curly Howard: Take a bath.

Moe: [seeing the canopy bed] A triple bed! Just what we need.
Curly: I want the upper berth – you get less air.

Curly Howard: [Thinks the canopy bed is a bunk bed, steps up Moe to get to the top. Feels it] I’ll be able to sleep up here for a week, this bed is so soft. Give me a call for Wednesday.
[Lays on his back and then the bed collapses]

Curly: [having drunk champagne, and seeing Darwin the monkey] Moe, I got ’em, I got ’em! I’m seeing gorillas!
Moe: Don’t look at me when you say that!

Hotel Manager: [seeing the destruction in the room] My bed! My vase!
Curly: Quiet! I can’t hear myself read!

Curly Howard: [Curly reads a registered letter of their prize money and sees that taxes reduced their prize money into $4.95] Nyaaaaa…
[faints, Larry grabs it. reads it]
Larry: They’ll put us in jail!
[faints, Moe grabs it]
Hotel Manager: Did he say jail?
Moe: No, Yale. He’s got a brother in college with two heads. They got him in a bottle.
[Looks at the telegram for a second and flinches]
Hotel Manager: What’s the matter? Is something wrong?
Moe: Nothing. The figures stagger me.
Hotel Manager: And so will your bill.

Curly: What’s that monkey got, that I ain’t got?
Moe: A longer tail.