Home » Posts » Yes, We Have No Bonanza

Yes, We Have No Bonanza 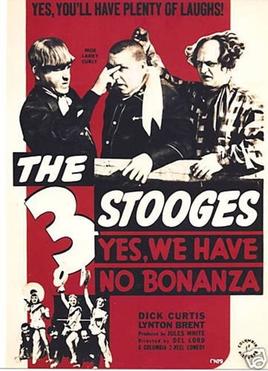 The Three Stooges short film Yes, We Have No Bonanzas is set in the American West, where Moe and Larry are singing in a saloon with their three sweethearts, while Curly is late.  The owner of the saloon, the villainous Maxey (played by Dick Curtis), is unhappy with their performance, and the girls reveal that they’re being blackmailed into working for Maxey, or he’ll have their father thrown into jail for his debts.

While serving as bartenders, they don’t overhear Maxey and his henchmen, who’ve robbed a bank and are planning to bury the loot later.  When the henchman pays for his drink with a twenty dollar gold piece that he says he ‘dug up,’ the Stooges think that he’s been prospecting for gold – and if he can do it, so can they, and pay off the debt of their sweethearts’ father, and they can all get married.

They go prospecting in the same spot where the villains have buried their gold.  After a slapstick fight where they mistakenly think that they’ve blown up their mule, Yorrick, with a stick of dynamite they find cash, bonds, and gold buried in the ground.  Not being the brightest bulbs on the Christmas tree, they don’t realize that bonds don’t grow in the ground.

They take the loot back to show their sweethearts.  Maxey and his henchmen realize that the Three Stooges have ‘stolen’ their loot, resulting in a short fight followed by a chase scene, where the villains are getting away in their car, with the Three Stooges chasing them on a cigar store horse – thanks to Moe lassoing a rope around their fender.

A gunfight ensues, with the Stooges fighting back with a beehive, causing them to crash into the Sheriff’s office, where the Sheriff (played by Three Stooges veteran Vernon Dent) notifies them that this money was stolen from the bank, ending with Curly’s “Yes, we have no bonanza!” to which Moe replies that they have a lot of bricks (from the fallen wall), and hits Curly with it!

Yes, We Have No Bonanzas is a funny Three Stooges short film – highlights include the Stooges acting as inept bartenders, the entire prospecting scene.  It’s available on DVD on the Three Stooges Collection volume 2.

Trivia for Yes, We Have No Bonanza