Home » Posts » The Tooth Will Out

The Tooth Will Out 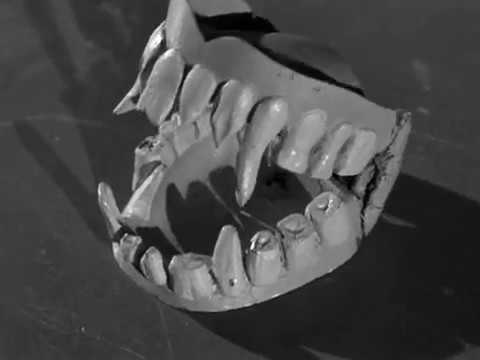 In The Tooth Will Out, the Three Stooges perform dentistry in the Old West. “Go West, young man, go west!” begs their dentistry professor, and so they do. Shemp does his classic blind act while trying to pull teeth, and the Stooges mix up “The Amateur Carpenter” with their dentistry manual.

The Tooth Will Out begins with the Three Stooges being fired and thrown out on the street.  In short order, they’re fired from an Italian restaurant as well.  And are chased down the street by an Italian chef (Emil Sitka) wielding a cleaver!  Looking for refuge, they dash into a building … 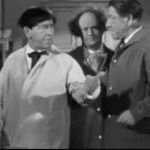 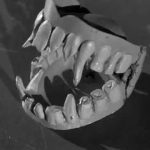 And soon they’re enrolled in Dr. Keefer’s (Vernon Dent) school of dentistry, with his assistant Miss Beebe (Margie Liszt).  For their final, they make a monstrous set of teeth that come alive – a very funny scene.  After “borrowing” a set of Dr. Keefer’s teeth for their final exam, they pass with the lowest grades possible.  And Dr. Keefer advises them to “Go West, young man, go West.”  And get as far away from him as possible! 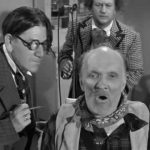 The Stooges do so, and soon have their first patient.  Shemp dons his glasses, and is virtually blind, as he begins drilling.  A very funny scene as well.  Then Dick Curtis barges in and throws the first patient out.  He needs a tooth pulled, and threatens to kill the dentist if it hurts! 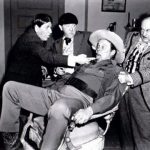 Shemp mistakenly reads from “The Amateur Carpenter” instead of his dentistry manual.  And after sandpapering his chest and putting varnish on his lid – Shemp pulls the tooth!  The wrong tooth!  And the short ends with them running for their lives out the door.

Funny movie quotes from The Tooth Will Out

Moe Howard: Easy, the mouth is at the front.
Shemp Howard: Oh, they moved it, huh?