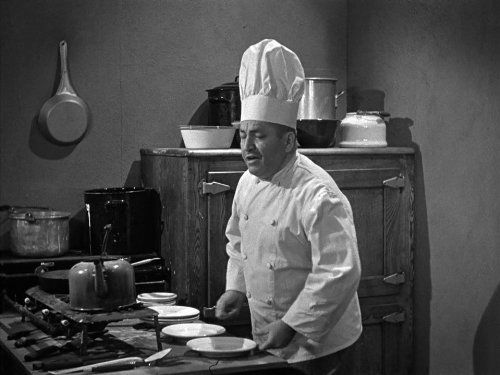 Like many of the Three Stooges’ short films, Busy Buddies is broken into two halves, starting with Moe, Larry and Curly as inept restaurant owners, and ending with a milking contest in an attempt to earn one hundred dollars. The first half of the film is the funnier, with Curly being a “mad inventor” working as the chef, while Moe and Larry work the counter and Three Stooges regular Vernon Dent as the suffering customer.  There’s ample room for slapstick here, and the Stooges don’t disappoint, with Curly serving heating pads as pancakes only to have to eat them himself (and cough out feathers), using Curly’s spring-loaded contraption to spill hot soup on Moe, accidentally spill a rack full of unpaid pies onto the unpaid pie vendor. 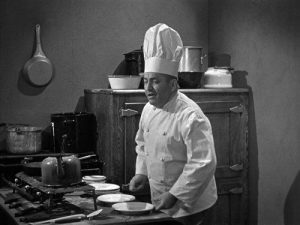 That last part, in fact, is what leads to the conflict, and the second half of the film — since the Stooges owe 97 dollars and can’t pay it, they need to raise that money by Monday or lose their restaurant.  They start by getting a job putting up posters, getting paid a penny for each one.  The first poster they put up advertises a milking contest, with a 100 dollar reward for the winner.

And Moe decides that Curly is going to win that money, even though Curly’s never seen a cow before.  This leads to a comic bit, one of the best parts of the movie, where Moe decides that Curly’s going to get practice on the “cow” behind the fence that the poster went on.  The cow, of course, is a bull, leading to Curly getting thrown over the fence — multiple times, each time getting a little more extreme, ending with Curly bouncing from a telephone pole, hanging by his suspenders.

The final part of the movie has Curly, as “K.O. Bossy,” trying to win the contest against the reigning champion.  It’s an attempt to parody the typical boxing match, which doesn’t quite work.  Even so, it has its’ moments, ending with Moe and Larry trying to rescue Curly from a ten-count by the referee, and Moe and Larry in an incredibly bad cow suit being thrown out of the ring.

Busy Bodies is available on DVD as part of The Three Stooges Collection volume 4.

Curly (Curly Howard): Are you casting asparagus on my cooking?

Moe (Moe Howard): I thought I told you to get some practice.
Curly (Curly Howard): The cow didn’t know that, he threw me out!