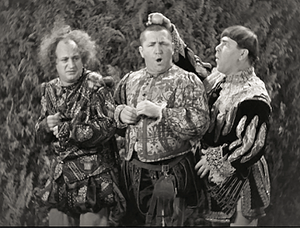 Set in Medieval times, the Three Stooges learn from their father (Walter Brennan) on his sickbed that they are of royal blood.  Now dubbed as the Duke of Durham (Larry), the Count of Fife (Moe), and Baron of Grey Matter (Curly), their father entrusts them to take up arms and protect the young queen of their old kingdom of Anesthesia.

They become the queen’s royal guards. But they soon display their “wrestling skills”. It’s a very funny scene that spoofs the “sport” of professional wrestling. While the Stooges are distracted, the evil Prince Boris kidnaps the queen. Then Boris blames them for her disappearance, sentencing them to die. The Three Stooges escape, free the queen, and end up knocking each other out.

Restless Knights is available on DVD as part of The Three Stooges Collections volume 1.

Larry: All for one!
Moe: One for all!
Curly: I’m for myself.

Queen: Where do you come from?
Larry: Paris.
Curly: Show her the postcards! [Moe slaps him]
Queen: What were you doing in Paris?
Moe: Oh, overlooking the Paris sights.

Moe: Queenie, he’s got the strongest feet in the kingdom!

Moe: What’cha do with the Queen?
Larry: Who, me?
Curly: Maybe he trumped her.

Larry: [the Stooges are about to be executed by crossbow] Maybe they’ll miss us!
Curly: That’ll be an arrow escape!

Larry: Cut my head off!
Curly: Not me!  I’d rather be burned at the stake!
Larry: Why?
Curly: A hot steak is better than a cold chop!