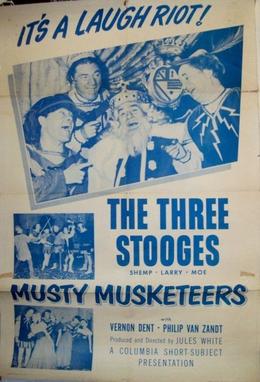 Musty Musketeers is a remake of the Three Stooges 1948 short film, Fiddlers Three, with a new beginning and ending.  The middle segments, with the Stooges needing to shoe their mule, Sue, and rescuing the princess, are identical.  The new material is funny enough to justify watching the short, unlike many of their remakes. 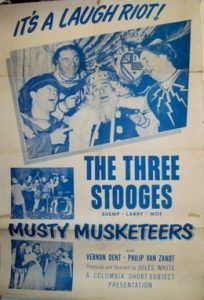 In the new beginning, the Three Stooges go courting, call on their  girlfriends and proposing – funny enough material with Moe picking on Shemp.  The new ending deals with the rescue of Old King Cole’s daughter, Alicia, from the clutches of the villainous court magician Mergatroid.  Old King Cole (played by Three Stooges regular Vernon Dent) has some good comedy moments as he “helps” the Stooges in their fight by giving such advice as “drop your sword! Give him an uppercut!” and promptly punching himself in the jaw as he gets overexcited.  Likewise, the new ending gives Mergatroid (played by Three Stooges regular Philip Van Zandt) more screen time, engaging in a comic sword duel with Shempeth while Moe and Larry duel with his guards.  Shemp’s duel is the more comedic, as he launches fruit from the tip of his sword, but it’s Larry who saves the day when he accidentally gets one of his arms caught in a large urn, and he “urns” his pay by clobbering the various villains.  The short film ends with the Three Stooges running into the arms of their girlfriends, accidentally knocking themselves out.

Moeth, Larryeth, Shempeth [singing]: Oh, a-calling we will come, to woo our maidens fair, we bring them flowers and while the hours …

Shempeth (Shemp Howard): But get ye not in their hair!

Moeth, Larryeth, Shempeth in unison: [on their knees] Wouldst be my wife and marry for life?