Home » Posts » Shot in the Frontier

Shot in the Frontier 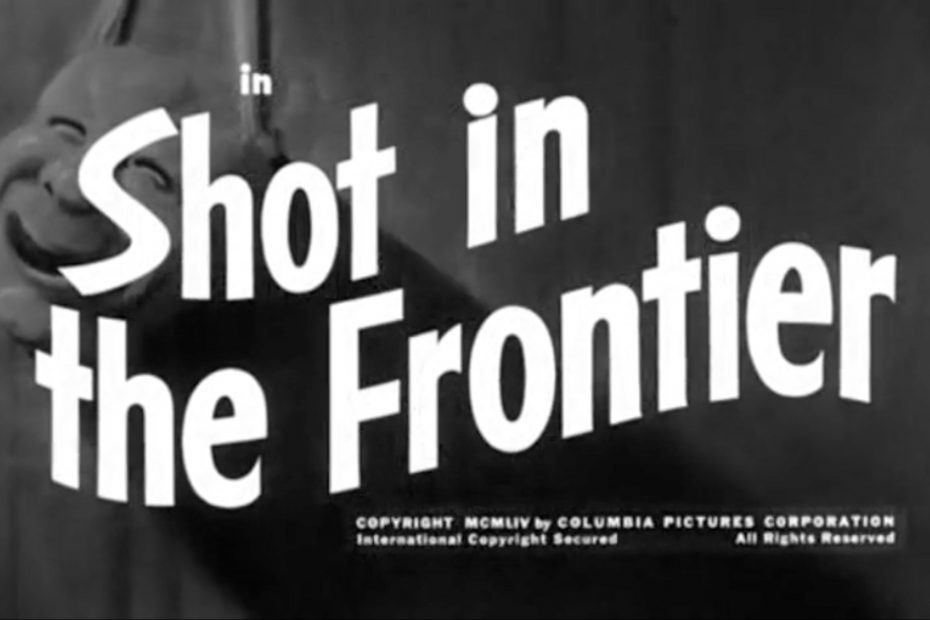 Shot in the Frontier – In a spoof of High Noon, the Three Stooges have a shoot-out with three outlaws who are out to get them.

The basic story of Shot in the Frontier is fairly straightforward. The dusty Three Stooges (Moe, Larry, Shemp) return home in the American Old West. There, their three lovely fiancees have been patiently waiting for them. They’re swiftly married in a funny ceremony, officiated by Emil Sitka, where the three couples share one ring! And after the wedding, their new brides inform the Stooges that, in their absence, the Noonan brothers wanted to marry them! And threatened to kill the Stooges!

You won’t stay and fight for us?

When Moe, Larry, and Shemp want to do the sensible thing — run away — the brides are offended that they won’t stay and fight for them! And after a triple slap, they storm off in a huff! So the boys first try to drink some liquid courage, before the deadline — High Noon! So Larry tries to turn the clock back, but in a funny bit of prop comedy, it tells them “No use – you’re doomed”.

Soon the Three Stooges are out on the street, trying to avoid the deadly Noonan brothers. There’s a lot of comedy, ranging from Larry and Shemp taking off their coats & hitting Moe, to the two groups in the middle of the street – missing each other!

Shemp, of course, wants to run away. But Moe tells him:

Soon, the Noonan brothers spot them, and the shootout begins! The Stooges take refuge on the street in front of the undertakers – “Diggs, Graves & Berry, Undertakers. M. Balmer, manager”. And the three tombstones they’re hiding in front of have funny carvings as well:

The actual shootout is quite funny as well. Marksman Larry shoots a rope holding a pot over the head of one of the villains, which falls and knocks him unconscious. Shemp knocks a barrel of gunpowder loose, which Moe shoot, and knocks Noonan out of his clothes! So Moe shoots the man in his long johns, in the posterior. And the man turns around, clutches his chest, exclaims “They got me!” and falls down. But the last Noonan is the toughest …

Shemp improvises a slingshot using his suspenders, while Larry runs into the general store for more ammunition. Unfortunately, he loads it with hot dogs! Finally, Moe challenges the last Noonan to come “fight like a man” with bare fists! First up is Shemp, who does his ballet boxing style — and gets knocked out. Moe holds Noonan while Larry hits him in the stomach with his head — only for Larry to be knocked out! Noonan had a piece of iron from a stove under his shirt. Soon Moe and Noonan are rolling back and forth on the street in a fight, but Shemp and Larry have recovered. Shemp uses his gun as a club, and mistakenly hits Moe on the head! But Larry kicks Noonan in the posterior with his spur, and Shemp knocks him out, leaving the Stooges victorious!

Happily ever after conclusion

The girls return, not having really left them of course. And the movie ends with the running gag of the old codger, Lem, playing the guitar — badly — as he’s done throughout the film. So Moe finally goes up to him and breaks the guitar over his head! Undefeated, Lem pulls out a ukulele! And Shemp gets a kiss from his beautiful bride, ending the short film.