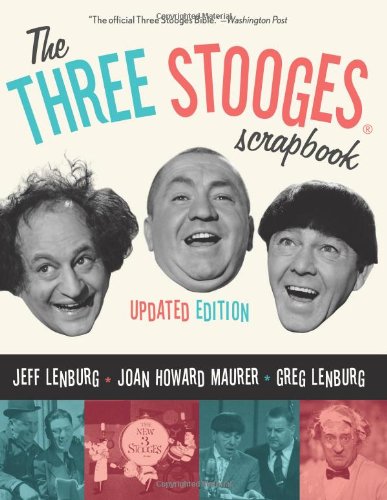 For over seven decades, fans have roared with laughter at the wild, two-fisted, knockabout antics of The Three Stooges performing their classic comedy mayhem in 200 comedy shorts, 25 features, and thousands of television and stage appearances. Chronicling the success of these beloved cinematic clowns, The Three Stooges® Scrapbook by Jeff Lenburg, Joan Howard Maurer–daughter of Three Stooges founder Moe Howard–and Greg Lenburg is a highly entertaining tribute to the trio’s enduring popularity and lasting legacy. This updated edition of the bestselling authorized and official history covers the lives and careers of the Stooges like no other.

Packed with personal memories and historical facts, new findings and revelations, and archived material from family collections, as well as over 400 photographs and illustrations, this meticulously researched and written edition has it all. Intimate biographies of each Stooge, a complete and accurately detailed team history, and the most comprehensive filmography ever compiled, including production and cast lists, synopses, release dates, working titles, production footnotes, and more for every comedy short and feature and the Stooges’ solo film appearances. Furthermore, it features exclusive interviews with the original stooges and later members of the famed comedy trio–Moe Howard, Larry Fine, Joe Besser, and Joe DeRita–and their family members and friends.

Brilliantly capturing the physical farce and slapstick humor that propelled the Stooges to superstardom, The Three Stooges® Scrapbook likewise offers a nostalgic look into the Stooges’ imprint on all aspects of American culture, including merchandise, comic books, television, records, imitators, and fandom. The result is an amusing and appreciative biography of some of the funniest men ever to share their talents.