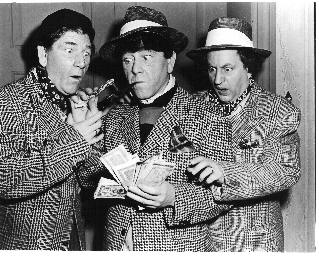 In Studio Stoops, the Three Stooges (Moe Howard, Larry Fine, and Shemp Howard) are mistaken for publicity men by the head of B. O. Studios and ordered to arrange publicity for the studio’s newest starlet, Dolly Devore (played by Stooge standard Christine McIntyre).  The Stooges plan on a faked kidnapping, which is overheard by real crooks who decide to cash in on the setup. After the Stooges try to convince the press and the police (including Vernon Dent as the police captain) about the “kidnapping,” they are contacted by the real kidnappers (led by Kenneth MacDonald), and the police won’t listen to their crying “wolf.”

The boys decide to rescue the girl themselves, with guns and money taken from the studio’s prop department.  However, once the crooks realize that the Stooges aren’t really armed, the chase is on! While Moe and Larry decoy the crooks, Shemp takes the girl’s place in the closet (zipped up in a garment bag to boot) to give her a chance to escape.  She does so, and Larry finds the police in a nearby room playing cards.  Larry has a brilliant idea, and throws pastry at the cops, having them chase him as he leads the police to the kidnappers.

In the meantime, Shemp has walked out of the closet onto the window ledge.  After the crooks are captured, Shemp seemingly falls to his death.  But instead, he hangs outside of the hotel, suspended by a telephone cable, and finally “dropping in” on another hotel guest.  This entire routine is a tribute to Buster Keaton’s So You Won’t Squawk.

Moe (Moe Howard): Do I look like a termite? [pause] Don’t answer that!

Reporter: I’m Brown, from The Sun
Shemp (Shemp Howard): Aw, that’s too bad, are you peeling?

Shemp (Shemp Howard): Keep your chin up; mine are down to my knees.

Gangster [To Shemp]: Who are you?
Shemp [grabbing sand from an ashtray and throwing it in his eyes]: I’m the sandman!

[thinking that Shemp has fallen to his death off a window ledge]
Moe (Moe Howard): Poor Shemp!
Larry (Larry Fine): And he had his good suit on, too.

Moe: You get a rope that’ll reach to the 10th floor and step on it.
Larry: Hey, you better bolt that door in case our adversaries come back.
Moe: Good idea. “Adversaries?”
Larry: Yeah!
Moe: Since when did you get so smart?
Larry: Oh, I’ve been smart all the time, only you didn’t know it. Say, when I come back, I’ll give you the password.
Moe: Brilliant! What’ll it be?
Larry: [Whispering] Open the door.
Moe: [Slaps Larry]