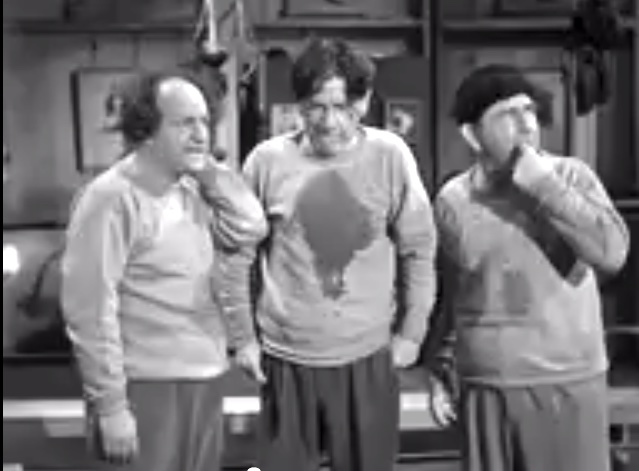 Fright Night begins with the Three Stooges (Moe, Larry, and Shemp) managing a boxer named “Chopper” Kane (Dick Wessel) — who can charitably be described as unmotivated. In an effort to get Chopper into shape, the Stooges demonstrate boxing with a dummy in their gym — only for the dummy to defeat all three of them! This puts Chopper into a good enough mood that he’s willing to work out in the boxing ring — and since there’s no sparring partner, Shemp reluctantly agrees to go into the ring with him.

At that moment, a pretty young lady named Kitty (Claire Carleton) comes by, and the smitten Chopper decides to show off for Kitty by beating Shemp senseless.  This is made easier by the fact that Larry has absentmindedly tied one of Shemp’s boxing gloves to the top rope of the boxing ring, limiting his ability to dodge. After a one-sided boxing match (very funny to watch, and one of the movie’s highlights), Chopper is now motivated to win, and the Stooges think that they have a chance of him winning the title — until Chopper leaves with Kitty, and a gangster named Big Mike warns them to make sure that Chopper loses in the first round — or else!

How to get Chopper Kane to lose?

Despite having bet their last penny on Chopper, the Three Stooges would rather keep breathing, and so Larry comes up with the idea of fattening Chopper up with sweets, as well as having the beautiful Kitty keep his mind off fighting.

Surprisingly, Larry’s plan actually works; until the night of the fight, when Kitty has given her affections to his opponent in the fight, “Gorilla” Watson — making Chopper fighting mad! Chopper goes inside as Gorilla Watson appears and, in a fit of anger tries to punch Moe — who ducks — and Gorilla accidentally breaks his hand against the brick wall!

At first, this seems to be an answer to their problems, since the fight will have to be postponed — but Big Mike had $100,000 waged on the fight, and isn’t happy at having lost his opportunity to double it.  And so Big Mike and his gangster pals take the Three Stooges to a warehouse, where he intends to get rid of them.

In the warehouse, after Shemp tells the gangsters about his “little brothers” (a very funny bit) the Stooges make a bid for freedom, running through the warehouse manically – the highlight of the short film.  A personal favorite is where Moe has knocked out one of the criminals, and acts as a puppeteer behind the unconscious crook when another crook comes by.  In the end, it’s Shemp coming to the rescue as the criminals use his head to break down the door that Moe and Larry are hiding behind — and Shemp takes the moment to pour mothballs on the floor, and knock each crook unconscious as they come out the doorway and slip uncontrollably.

The police arrive once all of the action is over, and take the crooks away — although a stray shot punctures a can of red paint that then leaks on Shemp, making him think that he’s been shot, and giving the Stooges one last comedic moment at the end of the short.

Larry (Larry Fine): You were ahead by a mile.
Shemp (Shemp Howard): That’s when I shoulda quit.
Moe (Moe Howard): You shoulda quit before you started.

Larry (Larry Fine): He’s so goofy, you could knock him down with a handful of peanuts … without the shells!

Moe (Moe Howard): It’s getting late.  What does your watch say?
Shemp (Shemp Howard): [puts watch to his ear] Tick-tick-tick-tick!

Cast of characters in Fright Night