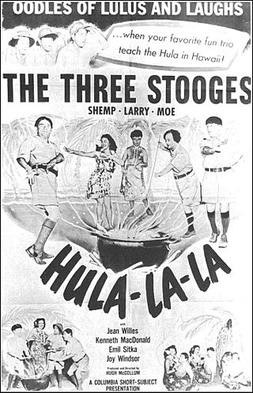 In Hula-La-La studio boss Emil Sitka has bought the tropical island of Rarabonga, to film the native dances.  But the natives don’t dance!  So he sends studio employees Moe, Larry and Shemp to teach them.  Unfortunately, while the natives can’t dance, they can shrink heads!  And Stooges villain Kenneth MacDonald as the tribe’s witch doctor wants to add them to his personal collection!

I recently saw Hula-La-La for the first time in many years, and I can honestly say that I truly enjoyed it.  There were many funny parts to the movie, including dance master Shemp trying to show the movie studio’s showgirls the “correct” way to dance.  The first half of the film has a hilarious send-up of the studio executives, with Emil Sitka playing the head of the studio who’s constantly surrounded by three sycophants.  Including one whose job it is to keep a chair behind him at all times.  And failing at a comedic moment.  Nonetheless, he succeeds in sending Moe, Larry, and Shemp off to Rarabonga so that they can teach the natives there to dance.

Once there, the Three Stooges are swiftly captured by the natives, and introduced to the tribe’s witch doctor, played by Three Stooges regular Kenneth MacDonald, who delivers a nice performance as the smooth-talking headhunter.  He plans to wine and dine the Stooges before taking their heads the following morning.  And after a brief scene where two of the female natives admire Moe and Larry’s heads for their private collections … The king’s daughter Luana (Jean Willes) recruits their help to rescue her boyfriend from the witch doctor.  And to keep her from being forced to marry the witch doctor as well.  With her help, the Stooges manage to escape, and along the way find a box of grenades left over from World War IIâguarded by a four-armed idol.

Soon, Shemp is hiding under a couch in Luana’s hut, when the witch doctor comes in to talk with her.  While a lizard wanders in and starts crawling on Shemp’s leg, causing him (and Luana) to bounce up and down.  To add injury to insult, the lizard leaves and a small crocodile takes his place, and poor Shemp is soon exposed.  Meanwhile, Moe is trying to take the box of grenades away from the four-armed idol, in a very funny slapstick scene with the idol doing the slapping.  It’s a very funny scene, especially when Moe tries to get Larry to get the box.  And Larry has no problem (at first, anyway).

The Three Stooges are soon recaptured, and Shemp (“the beautiful one”) is about to lose his head.  Until Moe goads the witch doctor into proving his strength by cutting through his “puny” box … Filled with hand grenades!  Soon the witch doctor has “gone to pieces”, and the short film ends with the Three Stooges giving the natives their first dance lesson.

Shemp (Shemp Howard): I wanna keep my head! I’ve had it ever since I was a little child.

Larry (Larry Fine): Where do you get these heads?
Witchdoctor (Kenneth MacDonald): My warriors find them in the jungle.
Moe (Moe Howard): Oh, sort of finders keepers.
Shemp (Shemp Howard): Yeah, tails you win, heads they lose!

Moe (Moe Howard): [surrounded by natives with spears] Do you see his point?
Larry (Larry Fine): No, but I feel it!

Witchdoctor (Kenneth MacDonald): Why, you impertinent swine!
Moe (Moe Howard): Flattery will get you nowhere.

Luana: My father wants to know where did Varanu go?
Moe (Moe Howard): Well, you tell him something unexpected came up, so he went to pieces.