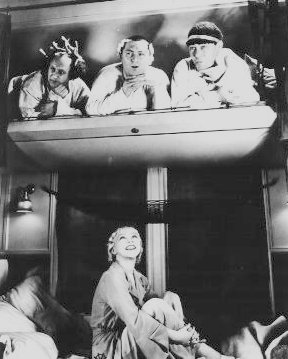 Woman Haters is the very first Three Stooges short film made for Columbia Pictures, and because of that is quite different from what we’ve come to expect from the Three Stooges. A “Musical Novelty”, it was the sixth in a series of short films of singingâand rhyming.  All of the movie dialogue is in rhyme. And the billing isn’t quite right, with Curly being billed as “Curley” (as was normal for the first several shorts). And the movie seems quite a bit more Larry-centered than usual.  Having said all that, it’s still very funny, and well worth watching.

The basic plot has the Three Stooges (Moe, Larry, and Curly) joining the Woman Haters Club, which Stooge regular Bud Jamison is chairman.  He initiates the Stooges into the club with an eye-poke each, which quickly leads into slapstick among the three, with Curly using his derby hat as the sound behind his imaginary machine gun.  Only a week later, Larry has met a beautiful girl (Marjorie White) that he intends to marry that very night. Until Moe and Curly convince him via slapstick of the beatings that he’ll receive if he leaves the club!  Larry goes to break off his engagement, only to be re-convinced by his girl’s father and uncles of the beatings that he’ll receive if he doesn’t marry her!

Larry (“Jim” in the movie) now has to try to keep his marriage a secret from his friends who are traveling on the same train, who at the same time are initiating a very young Walter Brennan into the Woman Haters Club.  They quickly find Larry with his newlywed wife, who tries to talk his way out of the situation.  His wife, however, has had enough and begins flirting first with Moe (“Tom”) and Curly (“Jack”) to make Larry jealous.  Later, when the Stooges are in bed, and each trying to sneak away to visit the girl, she barges in, tells the boys off, and unintentionally knocking Moe and Curly out a window.  The film ends, many years later, as grey-bearded Moe and Curly are at the 30th meeting of the Woman Haters Club, and Larry walks in, wanting to join again!

Woman Haters is an unusual beginning for the Three Stooges, but a funny film, and definitely worth watching – despite the rhyming dialogue.  It’s available as part of The Three Stooges Collection Volume One DVD set.

Mary’s father: [talking to match the background music] That reminds me of a story, listen. [points to a fat woman]  That’s my other daughter there. When on her wedding day, the fella she was about to marry, tried to run away. Did you ever hear of a nerve like that? Well, I took care of that guy. In a room I locked him, then I socked him right in the eye.  [points to a cop]  Then I turned him over to my brother, the cop. He just picked him up. And spinned him round like a top. [points to a tall strong guy (Tiny Sandford)]  Then my other brother, who’s a fighter, began. Seemed ashamed to tell you what he did to that man.
Jim (Larry Fine): [Looks frightened] Did he marry your daughter?
Mary’s father: Did he? I should say he did. [points to a man with his foot in a cast and holding a crutch] There he is right there. He’ll be walking soon. Poor kid.