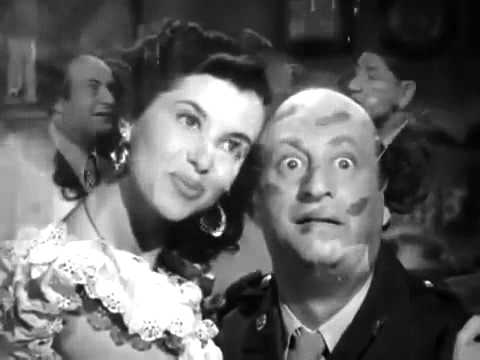 In Love at First Bite, the Three Stooges — Moe, Larry, Shemp — are preparing to welcome their overseas fiancees, decorating their apartment. Shemp keeps “gumming up the works” by leaving his used chewing gum everywhere — telephone receiver, etc. leading to the typical mayhem. Between the slapstick, they reminisce about how they met their respective girlfriends while they were in the military during World War II:

Back in the USA

Unfortunately, once the apartment is ready, the Stooges decide to toast the arrival with three mugs of Old Panther whiskey — “100 proof, bottled yesterday”, and swiftly get drunk — and Shemp and Moe fight a “duel” with seltzer water. Larry and Moe are so drunk, in fact, that Moe and Larry think that Shemp isn’t just passed out from the duel, but dead! Compounding alcohol and stupidity, they decide to get rid of Shemp’s “corpse” by putting his feet in cement, and sinking him at the bottom of the river. Fortunately, before that can happen, Moe and Larry take a nap, and wake up — having forgotten the whole duel. Shemp is stuck in the cement, and after a slapstick event (where Shemp can’t be knocked down and keeps bouncing back), they decide to blast him out of the cement.

The blast from the dynamite, however, blasts the trio through the roof, and to the docks, where their fiancees have been waiting; and when Shemp’s fiancee hugs him, they both fall into the water, splashing the others with water, and ending the short film.

Larry: It was love at first bite. I was stationed in Italy, eating bread and hot dogs, and waiting to be mustered out.

Moe: Why didn’t you tell me you were scrubbing the floor? That’s more dangerous than a foxhole!

Shemp: I was anxious to see the Paris sites.

Moe: [thinking that Shemp’s dead] Let’s cremate him!
Larry: We can’t, we ain’t got no cream!