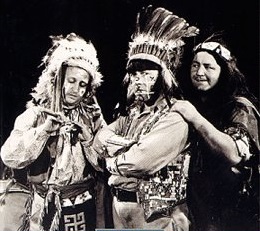 Whoops I’m an Indian is a fairly funny Three Stooges short film, set in the American old West.  The Three Stooges (Moe, Larry and Curly) are running a crooked gambling game, and taking the citizens of the town for all of their money.

Soon, their cheating (a magnet hidden in Larry’s shoe) is discovered, and the Stooges are soon running for their lives, hiding out in the forest.  This leads to the funniest part of the short film, as the Three Stooges try to live on their own in the forest.  Moe has a recurring bit where he’s catching a fish, and throwing it back telling it to send its’ big brother — each time the fish getting progressively larger, only for his final catch to be massive, only for Curly to accidentally throw it back into the lake.  Likewise, Curly has his own style of fishing, with each attempt failing.  Finally, Curly walks into the lake carrying a loaded rife, until he’s totally submerged, and shoots the rifle underwater several times — and he walks out of the lake with a string of fish hanging from his rifle.

Soon enough, they run into the local sheriff who’s looking for them, and they run for shelter and find a cabin, complete with Indian outfits that they put on as part of a disguise.  Moe and Larry disguise themselves as male Indians (nowadays we’d say “Native Americans”, but this was filmed back in the 1930’s), and Curly wears a dress, pretending to be an Indian squaw.  This backfires on them when the owner of the cabin comes home — Pierre, played by Three Stooges heavy Bud Jamison, who’s angry at all Indians since his Indian wife has run off with another man.  Soon, the Stooges are on the run from Pierre as well as the law.

Soon the Three Stooges, still in disguise, come into the local saloon, where they meet Pierre again.  This time Pierre is attracted to the “plump Indian squaw” Curly, whom he soon marries!  Things go from bad to worse as Pierre takes his “bride” to his bridal suite, where Curly’s wig comes off and the jig is up.  Eluding Pierre, the Stooges run for cover, heading into the first empty doorway that they see — the local jail!  The short film ends with the Stooges’ well-deserved incarceration.

Whoops I’m an Indian is a funny Three Stooges short film, and is available on DVD as part of The Three Stooges Collection DVD volume 1.

“Whoops I’m an Indian” (1936, short number 18 in the Columbia series) certainly does not suffer from overplotting. With the townspeople after the Stooges for cheating at gambling, the team has to first catch fish (highlighted by Curly shooting his trout under water) and then pose as Indians. A very funny sequence results when Curly, dressed as a squaw, is married to and goes on his honeymoon with a rough woodsman. It is a pity that the scriptwriter did not give him a clever line like that of Stan Laurel in an identical situation: “But I don’t love him.”

Moe (Moe Howard): What’d you do with the money?
Curly (Curly Howard): I threw it away so I could run faster! [Moe slaps him]

Moe (Moe Howard): [to Larry] You try and run down a moose, and a few meesus. I’ll run down an elk.
Curly (Curly Howard): I’ll try to find a Knights of Columbus.

[note left for Pierre by his Indian wife, Fifi]
Darling Husband,
I am running away with my true love, Chief Leaping Lizard.
Love and kisses, “you rat.”
Your loving wife, Fifi
p.s. You will find the can opener in the tool chest.

[while posing as indians]
Moe (Moe Howard): How.
Larry (Larry Fine): How.
Curly (Curly Howard): And how!

Pierre (Bud Jamison): For Indians to steal my wife is pretty bad, but to steal my block and beans!

Pierre (Bud Jamison): You keep my wigwam?
Curly (Curly Howard): You keep your own wig warm

Pierre (Bud Jamison): Now for our honeymoon! For you I have the grand surprise!
Curly (Curly Howard): [dressed as a Native American woman] So have I if ya only knew it!