Cuckoo on a Choo Choo 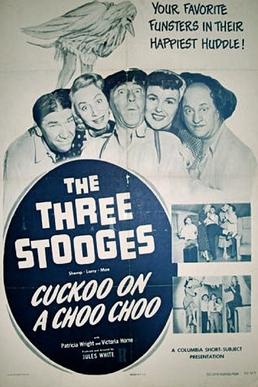 Synopsis of Cuckoo on a Choo Choo

In Cuckoo on a Choo Choo, Larry has stolen a train car and kidnapped the rich drunkard Shemp.  He needs to have Shemp marry Larry’s girlfriend’s older sister so that Larry can get married.  Moe, working as a detective for the railroad, tracks them down, only to find his former love, the older sister.  Shemp keeps drinking and hallucinating a giant canary.  No, really.

Review of Cuckoo on a Choo Choo

It’s frankly rather hard to review Cuckoo on a Choo Choo, since my mother raised me to not say anything if I can’t say anything nice — and there’s precious little nice to say about this Three Stooges short film.  For starters, the Three Stooges don’t act as a team in this film, and secondly, it’s hard to feel sympathy for any of the characters.  Larry is verbally abusive to his girlfriend and goes to the very edge of physically abusive.  I know that he’s doing a parody of A Streetcar Named Desire, but that doesn’t make his character any more likable.  Shemp is an inebriated drunk throughout the entire film, who stays so drunk that he hallucinates a giant canary, Carrie, whom he thinks that he’s in love with.

There are a lot of people who consider this to be the worst of the Three Stooges short films, and I frankly wouldn’t argue with that assessment.

Cuckoo on a Choo Choo is available on DVD as part of The Three Stooges Collection volume 7.

Trivia for Cuckoo on a Choo Choo

Moe (Moe Howard): Oh boy, Limburger, my favorite fruit.  If we only had some applesauce.

Moe (Moe Howard): Sorry kid, sorry, say a few syllables, tell me your name so I can tell your mother.
Shemp (Shemp Howard): My mother knows my name.