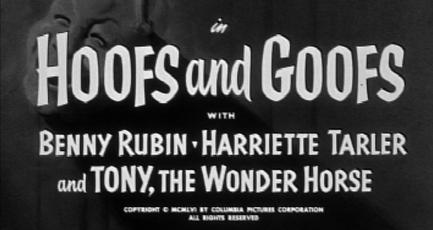 Hoofs and Goofs has the distinction of being the first Three Stooges short film with Joe Besser. It deals with the concept that the Three Stooges sister, Birdie, has died over a year ago, and Joe is still mourning her death. He has taken up the study of Reincarnation, in the hopes of finding Birdie in a new body, and he does, with Birdie having been reincarnated as a horse.

The Stooges take her back to their apartment, leading into the funniest moment of the film, as the ceiling plaster falls on the downstairs apartment of their landlord (Benny Rubin), falling into his soup and knocking him in the head.

Birdie is pregnant, and the Stooges act as midwives, as they become “uncles”. The movie ends with Joe waking up, revealing that the whole thing has been a dream — and the “real” Birdie (Moe Howard in drag) takes offense, and attacks Joe.

Not one of their best movies, but it launched a sequel Horsing Around in 1957. Hoofs and Goofs is available on DVD as part of The Three Stooges Collection volume 8.

Landlord (Benny Rubin): I’m going upstairs and give them 2 pieces of my mind!

[Moe tries to cover for Birdie’s neighing by pretending to make the sound]
Moe (Moe Howard): It’s my bronchitis. Awfully bad this time of the year.
[Birdie neighs again]
Landlord (Benny Rubin): That doesn’t sound like bronchitis to me!
Moe (Moe Howard): Maybe it’s because I’m a little hoarse today.

[The landlord falls down the stairs]
Moe (Moe Howard): Did you get hurt, Mr. Dinklespiel?
Landlord (Benny Rubin): No, I fell on my head.

Larry (Larry Fine): Birdie, you need a bath!
Birdie: You guys don’t smell like roses either.