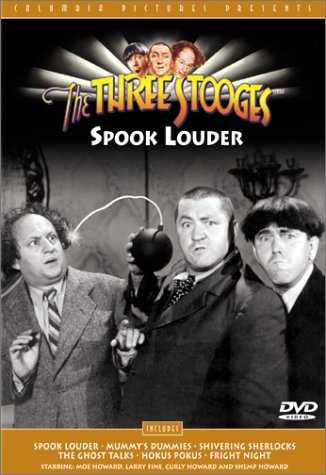 Shemp returned to replace his ailing brother Jerome (Curly).  Wisely, he didn’t try to imitate Curly, but to be his own man …and funny in his own right.  Fright Night is one of my favorite Stooge short films, in fact.  Mummy’s Dummies is one of their “historical” films, taking place in ancient Egypt, with King Rootintootin, Shivering Sherlocks has the Stooges acting in a heroic role rescuing their friend Mary from gangsters, Hokus Pokus is a very funny film, with the hypnotized Stooges ending up on a flagpole, and The Ghost Talks is slightly unusual for the Stooges – still funny, it’s more of a ghost story.  Taken as a whole, I recommend the six-film DVD – a good value for the price.

This DVD contains the following six episodes on one DVD:

The Three Stooges are hired as caretakers by an eccentric inventor who leaves to demonstrate his death-ray invention in Washington. Moe, Larry and Curly then have to deal with enemy spies (disguised as ghosts) and a mysterious pie-thrower.

The Three Stooges are managers of a boxer, “Chopper,” and have bet their life savings on his next fight. Unfortunately, gangsters want Chopper to lose, and the Stooges decide it’s better to lose their money than their lives. And so begin to soften up Chopper so that he’ll lose the fight. When Chopper’s opponent steals his girl, the plans fall apart, with Shemp receiving a thrashing in the ring. “Remember, Chopper, love taps!” And the boys fleeing from gangsters in a warehouse (with Moe acting as a puppeteer to an unconscious gangster as a very funny highlight). Shemp’s first film debut as the Third Stooge, and well worth watching.

Set in ancient Egypt, the Three Stooges run a used chariot lot where they unload defective chariots on unsuspecting customers. After cheating the head of the palace guard, however, they’re brought to the palace to be executed. Luckily, after curing the toothache of King Rootintootin (well played by Vernon Dent), they are made royal chamberlains instead. After recovering tax money stolen by a corrupt official, the King rewards them with marriage to his homely daughter. Moe and Larry select Shemp to be the ‘lucky’ groom.

The Three Stooges witness an armed robbery and are questioned by the police as suspects. After passing a lie detector test, Moe, Larry and Shemp are freed but are now the only ones who can identify the crooks. Meanwhile, their friend Gladys (played by Stooge regular Christine McIntyre) has inherited a house in the country and the boys go with her to inspect it prior to sale. The house turns out to be the crook’s hideout, who kidnap the girl, leaving the Stooges to the rescue.

The Three Stooges are working as furniture movers, and on a rainy night are sent to move some items, including a suit of armor, from a spooky old house. The armor is haunted by the ghost of Peeping Tom, who has no intention of leaving. The ghost foils the stooges attempts to take the armor, until Lady Godiva shows up and the two ghosts ride off together. I fondly remember watching this when I was a child – it has some very funny moments

The Three Stooges are taking care of their friend Mary, an invalid confined to wheelchair. What they don’t is that Mary is only faking her disability to swindle her insurance company. When the boys witness a hypnotist, “The Great Svengarlic”, doing his act, they think he might be able to hypnotize Mary into walking. Instead, they become subjects for his show and are hypnotized into walking out on a flagpole high above the ground. When they come out of their trance and realize their predicament, they fall into a window. This startles Mary, who jumps out of her wheelchair just as the insurance adjuster (played by Stooge regular Vernon Dent) is about to hand her a check. A very good short, later remade as “Flagpole Jitters.”