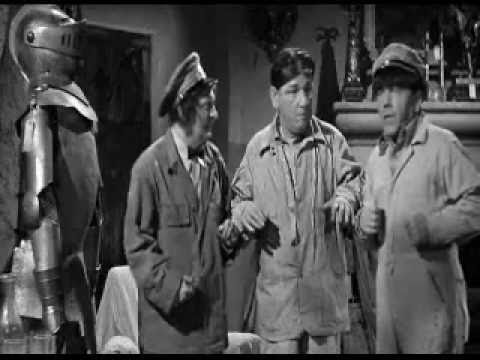 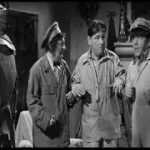 In Creeps, the Three Stooges (Moe, Larry, Shemp) tell their three sons (also played by the Stooges) a bedtime story about when they worked as moving men, assigned to the haunted Smorgasbord Castle. All goes well until a clanking suit of armor inhabited by the ghost of Sir Tom (voiced by Phil Arnold) instructs the Stooges to leave him alone. Shemp, Larry and Moe all take turns trying to move Tom’s haunted armor, but he scares the Stooges away.

In order to get their lookalike children asleep, Moe, Larry and Shemp tell their kids a scary bedtime story about ghosts and knights and murders — “so we can sleep real good!” — and tell the story in flashback, as they’re working as moving men, moving a variety of artifacts from an old castle — on a dark and story night, of course.

The proceed to do their work, frightening themselves … until a haunted suit of armor starts talking to them, telling them that it doesn’t want to leave. The typical “haunted house” shenanigans ensue, with each Stooge — one at a time at first for comedic effect — interacting with the haunted armor, including turning him into a slot machine.

The Three stooges insist of moving all of the items, include the armor haunted by the spirit of “Sir Tom, the brave knight” — who doesn’t want to go, and threatens them with bad luck if they persist. Spooky shenanigans ensue, with an encounter with a frog, a talking skeleton, and a guillotine. Tom finally attacks, and the flashback ends, with the Stooges explaining to the children that Tom choppend their heads off. Unsatisfied with the story, the toddlers complain, until their loving fathers conk them on the head, putting them to sleep and ending the short film.

In short, Creeps is a remake of The Ghost Talks, with very little new footage added. There’s little here to recommend it, but it’s available on DVD as part of The Three Stooges Collection volume 8 for those who are interested.