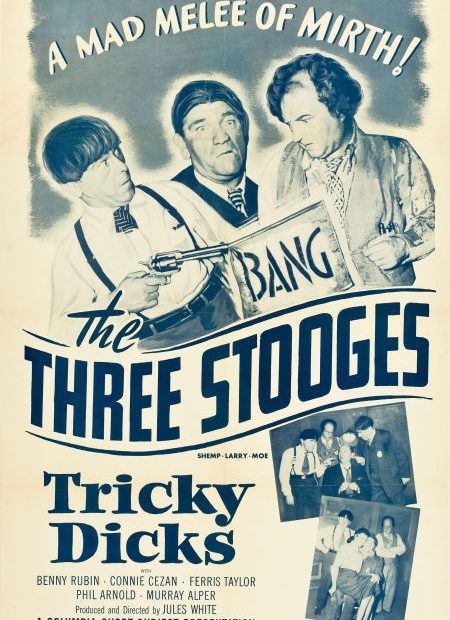 Tricky Dicks is a short film starring the Three Stooges that parodies TV and movie police shows, and does so in a very funny short film.  The entire short film takes place inside of a police station, where the Stooges are all working as police officers – Sergeant Moe, and detectives Larry and Shemp.

It’s a fast-paced short film, with lots of verbal humor, as well as the trademark Three Stooges slapstick. The basic plot has the Three Stooges charged by their police chief, B. A. Copper, to solve a murder.  They begin interrogating various individuals, including “Chopper” whose confession to the murders goes unheeded by the Stooges. Also a wonderfully funny Italian organ grinder played by Benny Rubin, who flees the police department upon hearing of a murder …. But leaving his monkey behind.  The monkey seems to have it in for Shemp, until the actual murderer arrives, and starts shooting up the police station. Until he’s stopped by … the monkey with Shemp’s gun!  The short film ends with a very Looney Tunes moment as Shemp, having been shot, doesn’t need a doctor — he needs a plumber.

Shemp (Shemp Howard): Where were you born?
Slick Chick (Connie Cezon): In bed.  I wanted to be near my mother.

[Repeated line]
Sergeant Moe (Moe Howard): I have to do everything around here!

Larry (Larry Fine): Are you guilty?
Chopper (Phil Arnold): I am the culprit of this heinous crime.
Sergeant Moe (Moe Howard): Not gonna talk, eh?

Sergeant Moe (Moe Howard): [answering phone] Hello?! Yeah?! Detective bureau, Sgt. Moe speakin!! [pause] Oh, wait a minute, Clancy! [sits down behind a desk] Go ahead! [pause] You say there’s a dead horse on Ticonderoga Street?! [picks up a pencil and begins to write ] How do you spell ‘Ticonderoga’? [pause] Oh, you don’t know, either? Well, drag him over to First Street!

Shemp (Shemp Howard): Release that guy who stole eleven bottles of whiskey. I know he’s guilty, but the DA said we can’t make a case out of eleven bottles.

Shemp (Shemp Howard): [after hitting Moe with a baseball bat] Moe! I meant to hit the other monkey.