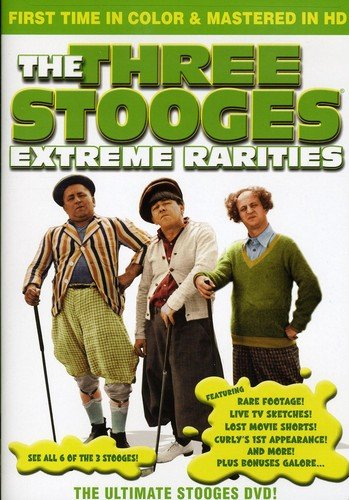 In a nutshell, The Three Stooges – Extreme Rarities lives up to its title.  There’s a wide range of items on the DVD, some excellent, and some less so.  For example, the three segments with the Three Stooges (Moe, Larry and Curly Joe) on the Steve Allen Show are an absolute laugh riot! The first time I’d ever seen these.  As I was watching them on a laptop computer in my bedroom, one by one my children wandered in and starting watching, and laughing, alongside.  Likewise the segment from the Danny Thomas show (with Moe, Larry and Curly Joe, as well as Tim Conway and Martha Raye) is hilarious, as is the Shemp Howard short film, Heavenly Daze, both in restored black and white and colorized versions.

Some of the other items are not funny, but interesting, such as a rare interview with Larry Fine after his career-ending stroke.  Other items that are worth watching include an interview with the Three Stooges (Moe, Larry and Curly Joe) and their wives at a family picnic.  Some things that are less interesting are a few newsreel-type items that only have a few seconds of the Stooges on-screen, and (depending on your tastes) the various movie trailers as well.  Having said that, The Three Stooges – Extreme Rarities is a wonderful addition to my Three Stooges collection, and I hope that you get as much enjoyment out of it as I and my family do.  I rate it a solid 4 clowns out of five.

Hollywood on Parade
A short with the Stooges and other stars at the time
Screen Snapshots
Another short with the Stooges and other stars of the time
Heavenly Daze
Colorized 1948 Three Stooges short film, featuring Shemp returning to Earth after his death to rescue Moe and Larry from their evil ways, trying to con people with their new invention, a fountain pen that writes under whipped cream.
Joe Besser Interview
Interesting interview about how Joe became a Stooge
The Stooges on the Steve Allen Show
Moe, Larry and Curly Joe perform in three separate appearances on The Steve Allen Show – an operating room sketch, the Stooges demonstrating how Hollywood treats stunt men, and the famous “Rajah! Haha?” routine) For me, this is the highlight of the DVD, even more so than Heavenly Daze – and I’m a fan of Shemp Howard.
Stop! Look! and Laugh! Trailer
Trailer for a Three Stooges clip movie with Jerry Mahoney and his puppets
Simoniz Commercial
The Three Stooges (Moe, Larry, Curly Joe) do a commercial for Simoniz Car Wax
Snow White and the Three Stooges
Movie trailer for Snow White and the Three Stooges, one of the Three Stooges oddest feature-length movies
Danny Thomas Presents Comics
Live appearance on the Danny Thomas show, with the Three Stooges (Moe, Larry, Curly Joe) try to “go legitimate”
Star Spangled Salesman
Promotional short film for The US Treasury department
Dickies Jeans Commercial
The Three Stooges (Moe, Larry, Curly Joe) in a short commercial for Dickies Jeans

The bonus features on the DVD include:

Heavenly Daze in Black and White
the 1948 short film in its’ original black and white, digitally restored
Larry Fine Interview
Rare interview with Larry Fine, made after his career-ending stroke
Knife of the Party
Shemp Howard documentary
Three Stooges Hand Puppets
The Stooges clown around with hand puppets made in their likenesses.  Very short.
Three Stooges on Stage with Curly
home movie footage of the Three Stooges (Moe, Larry, Curly)
Gentlemaniacs
clips of Ted Healy’s other stooges, after they attempted to split off from Healy, becoming unsuccessful Stooge impersonators
Celebrity Charity Baseball Game
The Three Stooges go to Wrigley Field
On Stage with Curly Joe
rare home movie clips
Three Stooges Arthritis Commercial
There’s nothing funny about Arthritis … but the Three Stooges manage it anyway
Strictly for Laughs
clips from a pilot for a TV talk show
Four for Texas
Not the movie (where the Three Stooges have a small appearance), but the movie trailer
On The Go
TV show appearance with Jack Linkletter