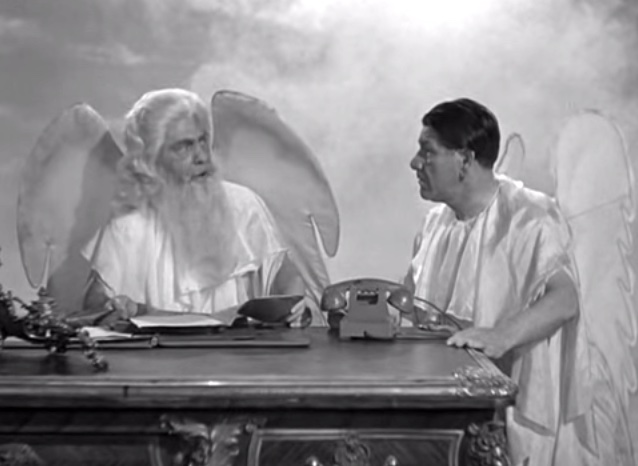 Heavenly Daze is a very funny, and somewhat different, Three Stooges short film.  It begins with a deceased Shemp at the gates of Heaven. He’s interviewed by his uncle Mortimer (played by Moe Howard).  Shemp’s name is not in the Lamb’s Book of Life … He is about to look for his “red pitchfork and asbestos suit” …. When Uncle Mortimer gives him a second chance … it turns out that Shemp’s cousins Moe and Larry are also in trouble, and if Shemp can return to Earth as an invisible ghost and turn them to the path of righteousness, he can return to Heaven for good.  After a run-in with a rain cloud, Shemp is on his way.

At the same time, Moe and Larry are mourning the death of Shemp at the law offices of I. Fleecem (Vernon Dent), a crooked lawyer who tries to steal the boys’ minor inheritance from Shemp.  Some funny moments occur as Moe, in a manner reminiscent of Bud Abbott, tries to fleece Larry but fails due to Shemp’s ghostly interference.  The boys realize that Shemp’s ghost is among them, but that’s not enough to turn them from the scheme that they’ve cooked up.

They use Shemp’s money to rent a fancy apartment, tuxedos, and a butler — all in order to fleece a wealthy couple (Victor Travers, Symona Boniface) out of $50,000 to “invest” in Moe’s invention -a fountain pen that writes under whipped cream.

Shemp’s ghost drives away their butler (Sam McDaniel). He then makes a slapstick end to the whipped cream mixing. It ends with everyone being hit in the face with whipped cream. And Larry is stabbed in the forehead with a fountain pen! Shemp thinks that he’s earned his way into Heaven. But he starts feeling warmer … fire!  It turns out that the entire event has been a dream sequence, where Shemp has fallen asleep smoking in bed.

Train announcement: All aboard! The heavenly express, bound for the Big Dipper, the Little Dipper, Earth, Mars, Venus, Kookamonga, and all points south.

Shemp (Shemp Howard): [having been soaked by a rain cloud] What’s the idea, you think you’re in California?

I. Fleecem (Vernon Dent): [reading Shemp’s will] … furthermore, I Shemp the Stooge being of an unsound mind and hereby proving it, do leave all my worldly possessions to my cousins Moe and Larry.

Larry (Larry Fine): Say, why would anybody want a fountain pen that can write under whipped cream?

Moe (Moe Howard): Get going, and answer the door.
Butler: I’m goin’ but my heart ain’t in it.

Mr. DePuyster: You look like you’ve seen a ghost.
Butler: Mister, you don’t know the half of it.