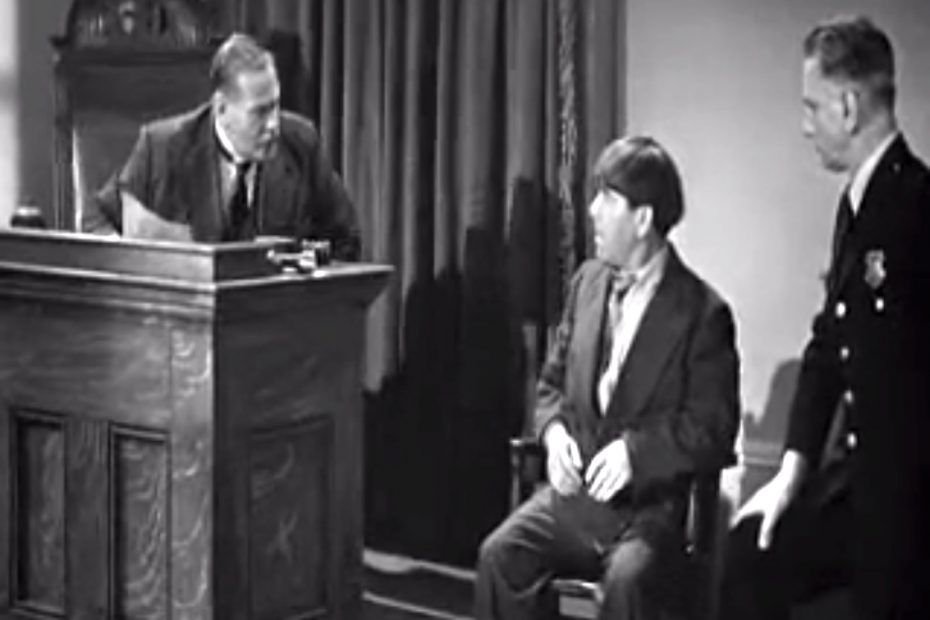 In a nutshell, the movie is told in flashback, as Moe is on trial for assaulting Larry and Joe, with Three Stooges regular Vernon Dent as the judge.  Moe’s business has failed, leading to a nervous breakdown and a debt of 10,000 dollars … He needs absolute peace and quiet.  Unfortunately, he’s sharing a room with Larry and Joe, “The Original Two-Man Quartet” whose musical practice is making Moe a nervous wreck.  A hilarious moment is when Moe is lying in his chair, moaning about “My nerves! My nerves!” as his cat walks by, and Moe snaps at the creature, “Quit stomping around!”  Larry and Joe decide to take Moe on a hunting trip, where the peace and quiet will do Moe good.

Once in the woods, the Stooges find an abandoned hunting cabin, and make themselves at home.  A funny bit ensues, as every time Moe puts food on the table and turns his back, a bear sticks its’ head through the open window and eats it.  And Moe blames Larry and Joe for eating the food without him.  Later, a local sheriff is chasing a wanted outlaw, and begins a very funny recurring gag as the bandit (or chasing sheriff) breaks through the cabin door, the door comes off its’ hinges and lands on Moe, as the person walks into the room walks over the door …and Moe.

Eventually, the Stooges capture the outlaw and earn a 10,000 dollar reward.  Enough for Moe to pay off his debtors!  Until they get so excited, the criminal escapes – and the reward evaporates away.  This is the final straw, causing Moe to chase Larry and Joe with an axe, which takes us back to the present time in the courtroom, where the Judge drops all charges.  And Moe proceeds to attack Larry and Joe again, breaking the axe on Larry’s hard head. Guns A Poppin! is available on DVD as part of The Three Stooges Collection volume 8.

Judge (Vernon Dent): Mr. Moe, you are accused of assaulting your two roommates with intent to commit mayhem.
Larry: [interrupting] You mean murder!
Joe: And he tried to kill us, too!
Larry: You ought to hold him on a habeus corpuscle!
Joe: That’s tellin’ him!

Judge: You have something in extenuation?
Moe: Oh, no, not that, your honor — you see, I had a good reason!

Judge (Vernon Dent): Were you ever indicted?
Moe: Not since I was a baby, your honor.

Joe: This area’s fine for hunting!
Larry: How do you know?
Joe: There’s a sign outside that says “Fine for Hunting”.

Larry: You’re gonna have noodles for breakfast?
Moe: Make it spaghetti.
Larry: Okay.
Joe: How do you want your eggs?
Moe:  Sunnyside down.  And don’t turn ’em over.

Moe: If there’s anything I like better than honey and catsup, it’s bologna and whipped cream – and we don’t have any.

Moe: You’re right — there is a bear out there.  You boys go out and shoot him.  I’d go with you, but my nerves won’t let me.
Joe: Yeah, I don’t have the nerve either.
Moe: Larry, you do it then.
Larry: Alright, but if that bear kills me, I’ll never speak to you again.

Wild Bill Hookup: Say, that’s a nice gun you’ve got there.
Moe: Yeah, I got it for my bar mitzvah.