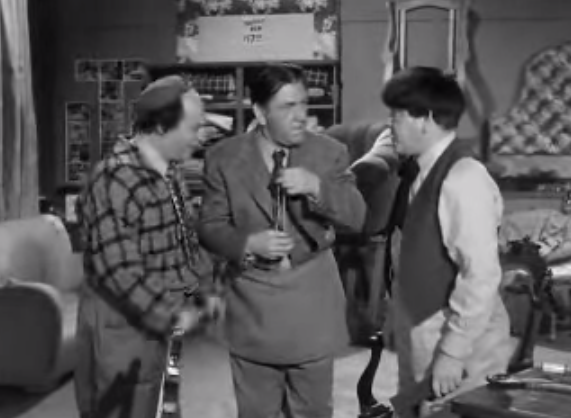 Hugs and Mugs begins with three beautiful ex-convicts, explaining to the audience that they hid a stolen pearl necklace at an express & storage office, and now that they’re free they intend to claim their ill-gotten gains before “Red and the gang” track them down.

Sure enough, Moe, Larry and Curly are working at the upholstery company, repairing furniture with sharp, pointy needles — gives the Three Stooges ample excuse for their trademark slapstick humor.

Soon the girls arrive, planning to divert the Stooges’ attention by flirting with them as a cover while they search for the pearls — which Shemp has put into his pocket.  The girls’ plan works to perfection, quickly reducing the Stooges into quivering puddles.

The search is on

Soon, however, the Stooges notice Christine shredding a chair while looking for the “hidden” pearls. This leads to a “tearing” fight between herself and the Three Stooges.

Meanwhile the other girls (Nanette Bordeaux, Kathleen O’Malley) keep searching.  Soon the girls decide to “reconcile” with the Stooges in order to get close enough to search their pockets, leading to mouse traps and a tickling fit.  Soon, however, the pursing gangsters have tracked the girls down …

Shemp Howard: You know, I’ve often wondered what makes me so irrisistable to women.
Fifi: It’s your good looks!

A funny slapstick melee breaks out, ending with a fight in a bin of stuffing — and Shemp armed with a hot iron!  The gangsters run off, and the girls reveal that they’ve been looking for the pearls to return them to the rightful owners, and the three couples are happily hugging …. Until Shemp ends the short by burning his posterior and trying to find relief in a tub of water — with an electric fan in it, shredding the seat of his pants.

Hugs and Mugs is a very good Shemp-era Three Stooges short film, and I recommend it.  It’s available on DVD as part of The Three Stooges Collection, Vol. 6: 1949-1951

Girl: What a beautiful head of skin in front!
Larry Fine: You know what? I polish it with floor wax.

[After Lily has shredded a chair while looking for the pearls]
Shemp Howard: Hey, that chair was sold! Maybe the customer won’t take it.

Lily (Christine McIntyre): Don’t be angry, sugar pie, I was only playing.
Moe Howard: You should be playing tackle on a football team.

Shemp: [seated on a hot iron] I smell something burning.  Someone’s roasting a ham.  [pause] It’s me!

Trivia for Hugs and Mugs

1 thought on “Hugs and Mugs”