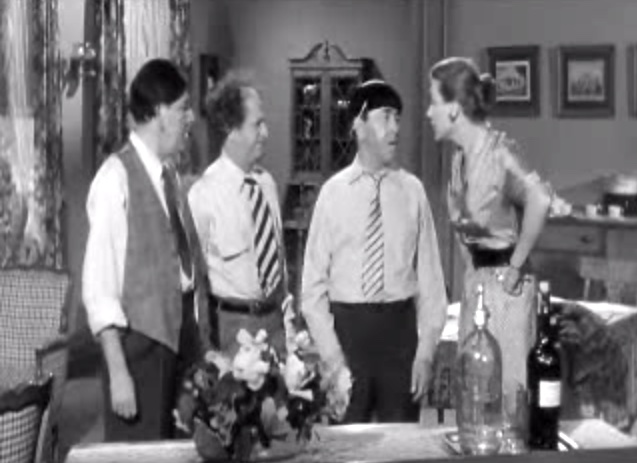 The Three Stooges (Moe, Larry and Shemp), egged on by Larry’s sister, decide to make money by cheating on their income taxes.  After the normal slapstick while preparing their taxes(with some very unusual “deductions”), they not only make a small fortune on their taxes, they decide to go into business by preparing other people’s tax returns as well.  Soon they’re rolling in dough, hosting a meal for one of their rich clients (allowing for more food-related slapstick) – but all isn’t as it appears!

Like many of the Three Stooges short films, Income Tax Sappy is broken into two halves.  The first half takes place in their home, where Larry’s sister has convinced them to cheat on their taxes in order to have more money to spend.  It’s a good mixture of verbal comedy and slapstick, as the boys try to cheat Uncle Sam interspersed with Moe bullying the others.

The pacing is fast, and the slapstick comes abundantly, such as Larry cutting a loaf of bread only for it to stretch like an accordion, and the completed sandwich having a life of its’ own, spitting mustard at Moe and the hot dog inside leaping away and yelping like a dog when Moe threatens it.

Another very good visual joke is where Larry shows Moe his scar from an operation, including a zipper in case the doctors need to go back in – and Moe repeatedly pulls the zipper up and down, oblivious to Larry’s pain.

Throwing a party for their Rich client

The second half of the movie deals with the Stooges who have become rich, not only from cheating the IRS but from opening a tax business and doing the same for their clients.

They are celebrating by hosting an elegant dinner party for one of their clients, Mr. Rich (played by comedian Benny Rubin) and his wife (played by Nanette Bordeaux), and more food-related slapstick is soon underway, with Larry attempting to carve the turkey with a scissors and accidentally cutting off part of Mr. Rich’s long beard.

Shemp uses his tuxedo shirt like a roller, accidentally serving his mashed potatoes on it.

And an extended routine where Larry fights with a lobster claw in his gumbo (reminiscent of Curly’s bowl of oyster stew in Dutiful but Dumb.  At the end, there’s a surprise waiting for our three chiselers, and after a final confrontation they’re facing the ‘hot seat.’

Overall, I enjoyed the first half of Income Tax Sappy better than the second.

Also, it’s much harder to cheer for them when they’re the villains of the picture.  Even so, I enjoyed it and rate it 3 clowns out of 5.  Income Tax Sappy is available on DVD as part of The Three Stooges Collection volume 7.

Moe (Moe Howard):  [answers phone] Oh, Joe! You got a hot one in Santa Anita for the third? Fine; five across.  That’s five, five and five.  Fifteen cents all together.