Home » Posts » Gypped in the Penthouse

Gypped in the Penthouse 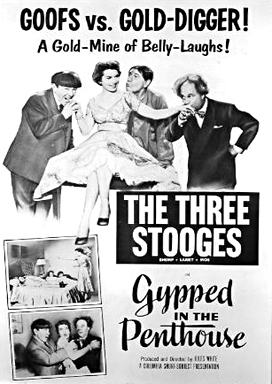 Synopsis of Gypped in the Penthouse

In a return to the Woman Hater’s club, Shemp and Larry both relate the story to how they were driven to the club by their encounters with a gold digger and her boyfriend/husband, Moe. Who in turn becomes the newest member of the club!

Movie review of Gypped in the Penthouse

Gypped in the Penthouse is unusual in several respects – the Three Stooges don’t act as a team, and until the very end the three of them (Moe, Larry, Shemp) aren’t on-screen at the same time.  In addition, Larry and Shemp not only stand up to Moe, but actually succeed in beating him up!

The short film essentially has Larry and Shemp, members of the Woman Haters Club (a reference back to Woman Haters, the very first Three Stooges short film), where each tells the story of how they were driven there.  Larry goes first, telling how his fiancee, Jane, threw him over for another suitor (Moe), when Moe brings a larger engagement diamond.  A fight breaks out between them, with Larry uncharacteristically getting the better of Moe.

Shemp then tells his story, where a pretty young woman, also Jane, takes him home and cooks him dinner, only to have him accidentally soaked by her malfunctioning dishwasher machine.  She sends his clothes out to the cleaner. Then she has him wear her husband’s pajamas while he waits.  But it’s all right, she tells Shemp, because she’s and her husband are separated.

While waiting, Shemp serenades her on her piano, and she admires his diamond ring, dropping it into the piano – plainly planning to keep it.  While she goes to answer the phone, Shemp attempts to retrieve his ring from the piano – falling through it and destroying the piano.  Soon afterward, the woman’s husband returns. “Separated” apparently meaning that her husband, Moe, was on a business trip!  The insanely jealous Moe quickly pulls out a revolver and starts looking for the strange man in their apartment.  Shemp escapes! But police arrest him for impersonating a woman!

Back at the Woman Haters Club

Afterward, they see their mutual friend Charlie (played by Three Stooges regular Emil Sitka) talking to a new member of the club — Moe!  A fight quickly breaks out, with each of the Stooges throwing a punch at the other and missing – but hitting poor Charlie!  The fight is one of the funniest parts of the film, ending with Larry and Shemp fleeing the club, where they literally run into Jane on the street carrying groceries.  And they enact their revenge on her by dumping eggs, flour, milk, etc. on top of her head.

Gypped in the Penthouse is generally held in lower esteem by Three Stooges fans. But I would say that’s unfair.  It’s certainly not their funniest short film, but it’s far from their worst.  After viewing, I asked my children, who watched it with me, how they would rate it, and they all rated  it 2.5 stars out of 5 – which I would agree with.

Gypped in the Penthouse is available on DVD as part of The Three Stooges Collection Volume 8.

Funny movie quotes from Gypped in the Penthouse

Larry (Larry Fine): Every time I look at the seven-dayy clock it stops! I can’t be that ugly … can I?

Larry (Larry Fine): [looking into mirror] Mirror, mirror, on the wall, who’s the handsomest one of all? [mirror breaks] I lose more mirrors that way!

Jane: You’re quite a musician!
Shemp (Shemp Howard): Just fair.  I play that in four sharps.  I used to play in 5 flats, but I got kicked out of the last one!

Shemp (Shemp Howard): There must be a way to get that ring without getting in trouble with the censor!

Shemp (Shemp Howard): [horrified when hearing Jane’s husband approaching] I thought you said you were separated!
Jane: He was away on business, that’s separated isn’t it?

Jane: If he finds you here, he’ll kill you!
Shemp (Shemp Howard): If you think I’m afraid … you’re right!

Jane: Why are you looking under the bed?
Moe (Moe Howard): Because that where I hide when I … what am I saying?