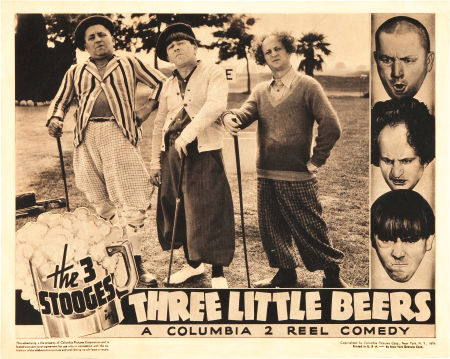 Three Little Beers begins with A. Panther (played by Three Stooges regular Bud Jamison) in his office, dealing with his beer company’s difficulties in delivering their products on time, when his foreman assures him that he’s hired three new delivery men — who are, of course, the Three Stooges, loading barrels of beer in the most precarious way on one of the company’s delivery trucks, with Curly on top of the pyramid of beer barrels.  Moe is handed a flyer about the company’s upcoming annual golf outing, with a top prize of one hundred dollars — a small fortune in the 1930’s.  Soon, after dropping a breakable barrel of beer on poor Bud Jamison, they’re off to make a delivery — to the golf course, where the second half of the short film takes place.

At the golf course

Once at the golf course, their first impediment is that the course is closed for the day for a journalist’s outing, leading to the Three Stooges standard “Press! Press! Pull!” routine; shortly afterward, they “borrow” some golfers’ clothes, and try their hand at golfing.  The slapstick starts fast and furiously, as the Stooges obviously know nothing about golfing, and start interfering with the others’ golfers game, while destroying the golf course.  Some highlights here include:

The chase is on!

Soon, the greens keeper, staff, and other golfers are chasing the Three Stooges, who escape in their beer truck.  However, they lose two of their beer barrels rolling down a hill, and start chasing after them.  The truck’s brake gives way, however, and soon all of the barrels are rolling down the hill, chasing the Three Stooges and other pedestrians, with Moe trying to do “log rolling” on top of a barrel, Curly hiding behind a telephone pole (and betting bonked on the head by a beer barrel anyway) and Larry trying to climb a tree to avoid them, only to get knocked into wet cement, where Moe and Curly soon join him, ending the short film.

A. Panther (Bud Jamison): Why can’t we make deliveries on time?
Foreman: We just hired three new men, and everything will be all right

Curly (Curly Howard): How do we shoot golf without guns?
Moe (Moe Howard): This way, Buffalo Bill. [pulls Curly along]

Moe (Moe Howard): What do you shoot yesterday, Jasper?
Curly (Curly Howard): [pantomimes rolling dice] I shot a seven, but they wouldn’t give me the money!