The Three Stooges: Stooges At Work 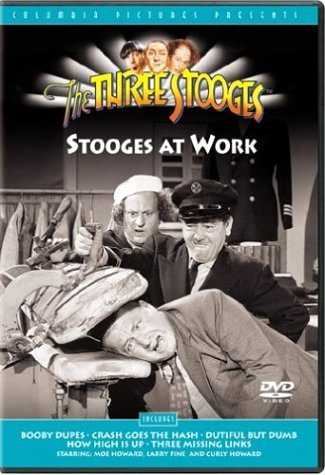 I rate it 5 clowns – highly recommended.

The Three Stooges are selling fish, and in an effort to do better they decide to cut out the middleman and buy a boat in order to catch their own fish. The boat is a floating junk heap, that is soon sinking, with Curly’s help. Things are not helped when the Stooges find a white flag with a big red dot in the middle, which they start waving in order to attract help — but ends with the U.S. military bombing them, seeing them waving a Japanese flag (this short took place during World War II).

The Three Stooges are mistaken for reporters, and offered $100.00 for photographs of Prince Shaam of Ubeedarn, so Moe, Larry and Curly pose as servants and infiltrate the home of the widowed socialte that the prince is going to marry. The typical kitchen mayhem ensues (re-using several ideas from earlier Stooge shorts, such as having a bird flying into a cooked turkey so that it moves around). Thankfully, the boys uncover the Prince as an imposter, rescuing the socialte from being robbed.

The Three Stooges are photographers for Whack magazine (“If it’s a good picture it’s out of Whack”), who mess up the assignment of taking photos of a movie star and his new bride. As “reward,” they are sent to the country of Vulgaria to get a photograph of the Vulgarians’ death ray – the Stooges are caught, and sentenced to the firing squad. For Curly’s last request? A giant cigar, in order to out-last the firing squad.

The Three Stooges are working as fix-it men who don’t have any work, so after irritating workers at a construction site, they end up as riveters on the 97th floor of a new skyscraper. Red-hot rivets and the Stooges are a bad combination, including gems such as Curly eating a rivet thinking it’s a hot dog, and having to parachute from the building to escape their angry boss, played by Vernon Dent.

The Three Stooges are working as inept janitors at a movie studio. After destroying the studio office, they get jobs in a jungle movie. Moe and Larry play natives, while Curly gets to wear a gorilla suit. The movie, however, is being shot on location in Africa, resulting in Curly meeting with a witch doctor to get “love candy” to win the heart of the leading lady. Unfortunately, a female gorilla shows up, and things go further awry.