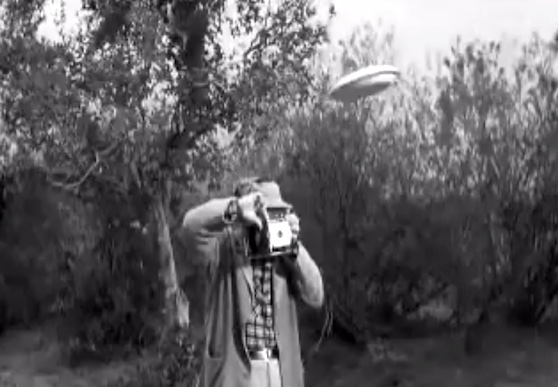 ‘Flying Saucer Daffy‘ is the last Three Stooges short film ever made. It stars Moe Howard, Larry Fine and Joe Besser as they retell the Cinderella story. Using a flying saucer instead of a glass slipper …

Flying Saucer Daffy is the final Three Stooges short film ever produced. It stars Moe Howard, Larry Fine, and Joe Besser.  Joe was the least popular of the “third Stooge” for several reasons. Including the fact that he didn’t want to be physically hit.  In this film, Joe breaks that rule, and takes the same sort of “abuse” that Curly or Shemp would have received.  The basic plot is a retelling of the Cinderella story. Joe is the “Cinderella” figure, living with his oppressive Auntie and cousins Moe and Larry.  Joe works to support the entire family, while the others sit around.

The film begins with Auntie drinking from a near-empty bottle that she empties, and tosses into the fireplace … That’s already filled with bottles.  Joe comes home with two cakes, as a present for his Auntie and cousins. He prepares to take a vacation with his brand-new camera, where he hopes to take a prize-winning photo.  Moe and Larry invite themselves along. They mistake a photo that Joe accidentally takes of a paper plate as that of a UFO.  Larry and Moe rush to claim the prize, leaving Joe out in the cold.

However, the tables are turned. The president of the magazine that published the photo, played by Stooge regular Emil Sitka, realizes the fraud. He has Moe and Larry arrested.  Joe’s “loving” Auntie promptly throws him out! He decides that the only thing to do is to go back to the campsite. And get a photograph of a real flying saucer.

Close encounter of the nicest kind

Amazingly enough, he does. He’s invited to take photographs of the saucer by its’ two beautiful female inhabitants.

A very comic moment is Joe trying to pack up his campsite in a hurry. So he can try to return to his Auntie and cousins.  Joe tries to show the photograph to his “family”. But Moe and Larry (released on bail) beat him up in Stooge fashion before he can.  Joe finally gets angry enough to stand up to his bullying cousins, and knocks them out.  He becomes famous with the publication of the photo. The movie fades out with an image of Moe and Larry, in jail. They’re wearing straitjackets, hitting their heads against a wall.

Flying Saucer Daffy is one of the best Joe Besser Three Stooges short films, and worth watching. It’s available on DVD as part of The Three Stooges Collection volume 8.